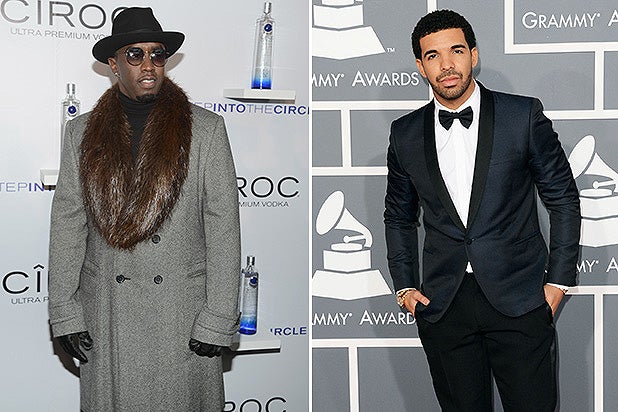 Go ahead and pour yourself a celebratory cocktail, Diddy — made with Ciroc vodka, of course.

The rapper and all-around mogul tops Forbes’ list of highest-paid rap acts for 2015, raking in $60 million over the past year.

Forbes attributes the lion’s share of Diddy’s money-pile to his Ciroc vodka, but also credits the TV network Revolt, his Sean John clothing line and the alkaline water brand Aquahydrate.

Diddy’s fellow mogul Jay Z took second place on the list, with $56 million in paper over the past 12 months, despite the super-iffy performance of his Tidal streaming service. Like Diddy, Jay Z’s fortune is derived from a diverse array of sources, including his Roc Nation entertainment company, his string of concerts with Beyonce and his Armand de Brignac champagne brand that he purchased last year.

Drake came in third on the list, with a relatively modest $39.5 million. Concert and album revenues contributed to the “If You’re Reading This It’s Too Late” rapper’s kitty, along with endorsement deals with Sprite and Nike.

Dr. Dre pulled fourth place with $33 million — a huge drop-off from last year, when his sale of Beats fattened his wallet to the tune of $620 million. Still, sales from his latest album, along with the biopic “Straight Outta Compton,” which he executive-produced, helped keep him on the list this year.

The list gave superstar producer Pharrell reason to be “Happy,” placing him in fifth with $32 million. He can thank touring, recordings and his judging salary on the singing competition “The Voice,” as well as his Billionaire Boys Club and Ice Cream clothing lines — even if some legal entanglements from his hit “Blurred Lines” put a dent in his piggy bank.