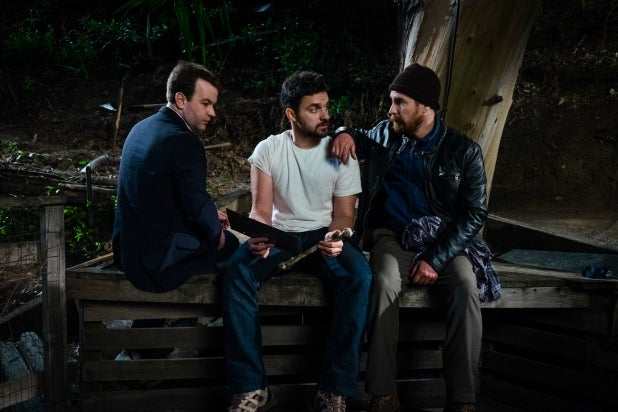 No one can accuse filmmaker Joe Swanberg of being a layabout: He’s directed 17 features since his 2005 debut “Kissing on the Mouth.” Any consistency he demonstrates, however, has more to do with his output’s regularity than its quality; for every “Drinking Buddies” he directs, there’s a tossed-off, half-baked “Uncle Kent.”

His latest, “Digging for Fire,” is such an endurance test that it’s the movie I’ve come closest to walking out of in many a month, and I sat through “Pixels” and “Fantastic Four” through the bitter end. Whether or not you like the term “mumblecore,” Swanberg is considered one of the ten-year-old genre’s founding fathers; “Fire,” however, reeks of old-school indulgence. With all the pretty, vapid Los Angeles navel-gazers lounging by swimming pools and engaging in pointless (and seemingly endless) conversations, the results feel like a sub-par Henry Jaglom movie, conceived on the quick after a location became available.

Jake Johnson (who co-wrote with Swanberg) and Rosemarie DeWitt star as Tim and Lee, a scraping-by couple with a young son. She makes house calls as a private yoga instructor, and he teaches at an L.A. public school, so when Lee gets the opportunity to housesit for one of her rich clients in the hills, it’s a treat for both of them. Still, there’s a lot of unspoken tension in the marriage, so Lee takes the kid to the beach to visit her parents (played by Judith Light and Sam Elliott) while Tim invites his buddies over to barbecue, drink beer and smoke weed.

The discovery of a bone and an old gun in the yard sets Tim to digging to see what else he can find, while Lee attempts to arrange a big night out with old friends who wind up cancelling on her. They both meet a head-turner of the opposite sex (Brie Larson as a young actress, Orlando Bloom as a sensitive chef who beats up a drunk who harasses Lee at a bar), and both have to consider whether or not they would cheat on their spouse. (The film’s one funny running gag has Lee stumbling upon a copy of the same marriage guide everywhere she goes.)

That’s pretty much all there is, plot-wise; the rest is talk, talk, talk, with a Sundance all-star cast (including Anna Kendrick, Sam Rockwell, Chris Messina, Melanie Lynskey, Mike Birbiglia, Ron Livingston and Jane Adams) spinning their wheels. I can’t say if the bulk of the dialogue was written or if it was improvised, but either way, it’s a waste of time.

There are no stakes here, and no characters to care about. Characters certainly don’t have to be likable, but we should at least be invested enough that we would rather look at and listen to them than, say, watch them get devoured by a sinkhole. Tim winds up being a metaphor for the screenwriter portraying him; he digs and digs and digs, and the second it seems like he might hit something interesting, he backs away from it as quickly as possible.

Even if you’ve liked some of this director’s output, and are fans of all of these performers — which I certainly am — “Digging for Fire” is an idea for a movie that never becomes a movie itself; it’s an even shallower “This Is 40” for the Pabst Blue Ribbon set.