Digital Hollywood was all about the future this week, but this time it seems like we might be making progress. 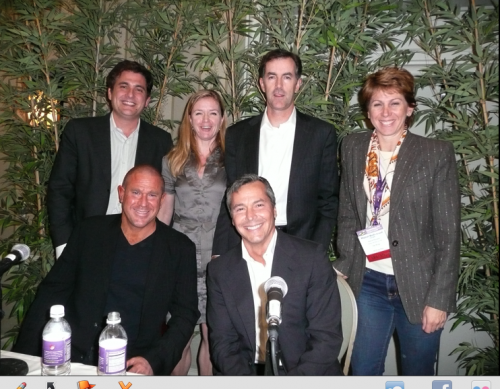 At a panel on Tuesday, forward-thinkers including Microsoft’s Vince Messina, Sandy Grushow, former Fox TV chief and founder of  Filmaka, TV Guide President Ryan O’Hara, Aubrey Freeborn of Fox’s home entertainment arm and Oxygen’s Jason Klarman addressed what’s working, what’s not working – and when we can expect to see real revenue streams out of all this convergence. (Photo from left: Klarman, Freeborn, O’Hara, me, next row: Grushow, Messina.)

Klarman talked about Oxygen’s strategy of  building programming that works in an integrated way between the television, laptop and cellphone. “Dance Your Ass Off,” an Oxygen show, not only draws viewers and sends them to the network website, but has a related weight loss club and sells the DVD.

He called that kind of interaction “cradle to grave” revenue streams, possibly an ill-chosen phrase, but there it is. “We can take control back by giving them (consumers) back total control,” he said.

Grushow, whose Filmaka is a database of thousands of mostly-undiscovered writers and directors around the world, made the point that these days it all comes down to the strength of the idea itself. You can’t plan for myriad revenue streams on diverse platforms, he said, if the core idea – the story – isn’t a success.

And at a time of advertiser reticence, he also said that there were “billions of dollars up in the air that can land in the digital space.” From his mouth.

O’Hara said that TV Guide has been preparing for decline for a long tim, since the raison d’etre of the printed magazine – TV listings — has been on the wane for some time. The brand has adjusted by building up its website to 20 millon unique visitors a month who come for news, listings and video content. And the cable channel, now co-owned by Lionsgate and JP Morgan, is turning into a “fan-friendly” channel for programming, an interactive programming guide and, soon, original programming.

One thing that’s clear is the playing field between advertisers and content creators has profoundly changed. Grushow worked with Ford to order up short films made by young directors from his database. The films, which cost $7,500 each to make, were used both on television and on the Ford website.

Now Seth MacFarlane on “Family Guy” is writing Windows 7 into a script for a special; that’s an experiment that may be determinative of how far creative people will go, and how comfortable advertisers are in handing their brand over to subversive talents like MacFarlane.

The current climate “is challenging everyone to come up with solutions, said Messina. “These days, the message is more important than the medium,” he said.

As the advertiser, Messina may be in the driver’s seat as regards shaping content, he well understands that the changing business models may make it ever more challenging for producers to afford high quality shows.

“At what price will we make good content?” he asked. “That’s an unknown.”