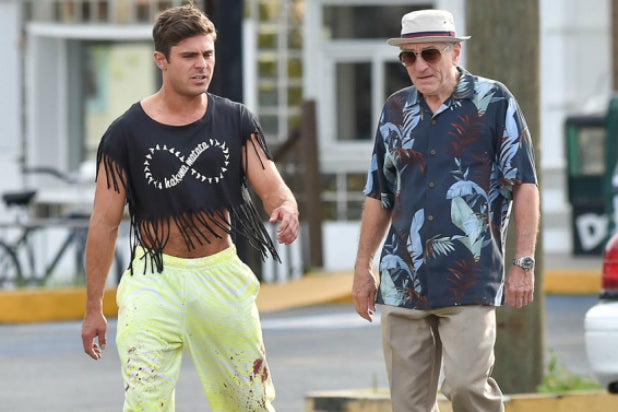 Say what you will about how he’s risking his reputation as Marlon Brando‘s heir with his poor script choices, but Robert De Niro seems to be having a blast in the shock-and-ew comedy “Dirty Grandpa.” Playing a recently widowed horndog, De Niro rants about smegma, waves a friendly hello to his tightly wound grandson (Zac Efron) while pleasuring himself, and has his burly body compared to a part of Mother Teresa that the late nun had promised to the Lord: it’s “old and tight.”

Like that last joke, “Dirty Grandpa” is a lot more vulgar than it is amusing. Director Dan Mazer (“I Give It a Year”) and first-time writer John Philips’s strategy seems to have been finding the crudest jokes possible for each scene, which wouldn’t be a problem if the material they came up with were also funny. (Plan B — which they rely on quite a bit — appears to have been De Niro sticking his thumb up an unsuspecting Efron’s behind.) Many of the gags land close enough to entertainment that I kept anticipating the next one to work. But by the time Aubrey Plaza‘s college-student character urges De Niro’s septuagenarian to “tsunami on [her] face” — you know, from his penis — I lost all hope.

At his grandmother’s funeral, corporate attorney Jason (Efron) overhears his cousin (Adam Pally) talk about his dog’s unfortunate tendency to spurt cascades of semen. Jason ignores this obvious sign to get far away from his family, instead opting on a road trip to Boca Raton with his once-close-but-now-estranged Grandpa Dick, despite the fact that Jason’s wedding is in just a few days.

Hoping to psychologically break his Celine Dion-loving grandson out of Lawyer Prison and Shrew Jail (Julianne Hough has the thankless role of the domineering fiancée), Grandpa Dick swerves their destination toward Daytona so the two can enjoy a belated beer-chugging, hottie-chasing Spring Break. Time might abscond with your friends and family, but you’re never too old for Jello shots.

“Dirty Grandpa” gets ugly-drunk on its title character’s preening smugness: Grandpa Dick is presented as The World’s Most Interesting Man, a cigar-chomping hybrid of Sinatra and Statham, but simply comes across as TWMIM’s scumbag brother.

Poor Efron, meanwhile, is put through the degradation wringer, as if he has to do penance for being so pretty. In between being called a lesbian repeatedly, his character has a swastika made of gushing dicks drawn on his forehead, wears clothes with large stains of various bodily fluids, and gets violated with a vodka bottle. (Here’s some free advice for Efron: If they’re laughing at you, it probably means they don’t respect you.) Unsurprisingly, then, neither of their characters’ wispy emotional journeys is remotely engaging or believable.

Plaza nearly pulls off the film’s only stab at true subversion, channeling the willful weirdness of her “Parks and Recreation” character April Ludgate. When her Lenore finally lands in bed with Grandpa Dick, she asks him to grouse about four o’clock dinners and worsening neighborhoods as foreplay. But Mazer ultimately diminishes Plaza into a collection of jiggling body parts, just like the ogling cameras on ’90s-era MTV from which the film seems to have learned its sense of fun.

If nothing else, “Dirty Grandpa” is consistent: it maintains a tone of aggressive charmlessness from start to finish.