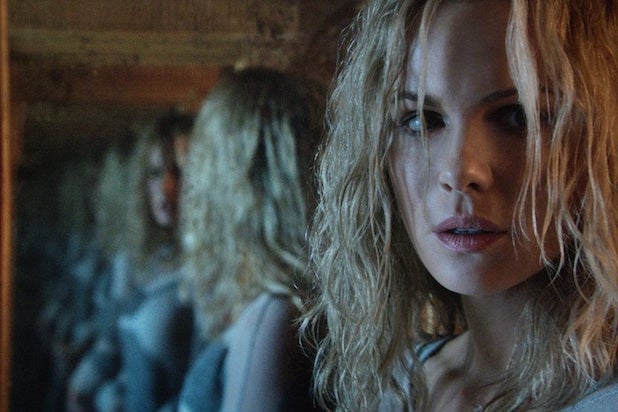 Relativity’s “The Disappointments Room” is tracking at a low $2 million ahead of its debut this weekend, setting the stage for the film to have one of the worst widely-released openings of all time.

Starring Kate Beckinsale, Lucas Till and Michaela Conlin, the movie revolves around unspeakable horrors that a mother and her young son discover in the attic of their country home.

The dire forecast may not be so much a reflection of the quality of the movie at this stage, however, as its release date was moved up just days ago. Announced by Relativity president Ryan Kavanaugh on Twitter, he noted a shift in strategy to video on demand for the title — which could also account for low expectations regarding the theatrical release.

Still, listed as a wide release (1,000 screens or more), industry trackers have it opening among the year’s three lowest grossing movies.

Bawdy Olympic-themed comedy “The Bronze” — which was originally acquired by Relativity but changed hands, later to be distributed by Sony Pictures Classics — only grossed $386,328 from 1,167 locations when it opened in mid March this year. It currently stands as the lowest-grossing opening for a wide release in 2016, behind the Weinstein Company’s “Jane Got a Gun,” which made $835,572 on its debut in late January on 1,210 screens.

TheWrap did not receive an estimated screen count for “The Disappointments Room” from Relativity before the publish time of this article, but with estimates set at $2 million, and assuming the movie opens in more than 1,000 theaters, that would make it the third lowest grossing debut for a movie so far this year, behind Sony’s “The Brothers Grimsby,” which opened at $3.3 million from 2,235 screens.

When it comes to the lowest grossing opening for a wide release of all time, predictions put “The Disappointments Room” among a class of epic, recent bombs, according to Box Office Mojo charts. (An exact ranking is somewhat elusive because the site breaks up historic low grossers into separate brackets based on theater count.)

Opening in 2,413 theaters, Universal’s “Jem and the Holograms” opened to virtual crickets last October, grossing only $1.4 million on its debut. Opening that same weekend in 2,012 locations was the Bill Murray dramedy “Rock the Kasbah” from Open Road, which didn’t do much better at $1.5 million.

Last year’s “Victor Frankenstein” had the worst debut for a film opening in 2,500 through 3,000 theaters, making only $2.5 million. TriStar’s Robert Zemeckis biopic starring Joseph Gordon-Levitt, “The Walk,” had the eighth-lowest grossing deputy in that theater-count category, making only $3.7 million.

Having opened in 2,020 theaters this past weekend, Fox’s sci-fi thriller “Morgan” made just $2.4 million — putting it in the bottom 20 worst openings of all time in its bracket.

Of course, the weekend after Labor Day tends to be a low-grossing period at the box office anyway.

With that in mind, Relativity could be offloading its “Disappointments Room” in this upcoming weekend’s slot.

Also Read: 5 Reasons Why Andy Samberg's 'Popstar' Is a Lonely Island at the Box Office

Originally set to open in theaters last March 25, the D.J. Caruso-directed film has moved around on the release calendar as Kavanaugh has worked to revive Relativity, which filed for Chapter 11 bankruptcy in July 2015.

The company has repeatedly changed the dates of several of its titles.

“Masterminds,” starring Zach Galifianakis, Kristen Wiig, Owen Wilson and Jason Sudeikis, will be released on Sept. 30 — 13 months after it was initially supposed to come out. It is directed by Jared Hess.

And “Kidnap,” starring Halle Berry, will debut on Dec. 2.

Relativity formally emerged from the Chapter 11 process in mid March. Having managed to resolve hundreds of millions of dollars in debt with creditors, the studio has landed an impressive $400 million in new equity financing from Los Angeles-based Maple Leaf Films.

Kavanaugh has remained chairman and CEO of the reformed Relativity Studios, while producer Dana Brunetti was named president and creative leader earlier this year.