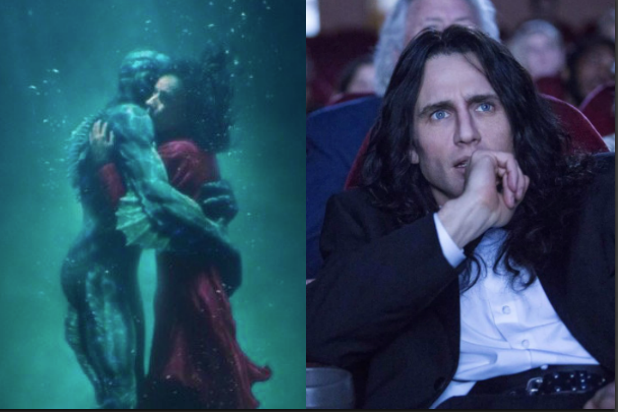 Though there were no wide releases in theaters this weekend, the specialty box office has been extremely busy as December kicks off with the release of three films with well known directors: James Franco’s “The Disaster Artist,” Guillermo Del Toro’s “The Shape of Water,” and Woody Allen’s “Wonder Wheel.”

Released by A24, “The Disaster Artist” tells the story of Tommy Wiseau, played by Franco, and the making of Wiseau’s infamous so-bad-it’s-good movie, “The Room.” Released on 19 screens, the film has opened to $1.2 million and has become only the sixth film to post a per screen average of over $60,000 with a PSA of $64,254. Franco directed the film from a script by Scott Neustadter and Michael H. Weber, and it also stars Dave Franco, Seth Rogen, and Alison Brie. “The Disaster Artist” has a score of 95 percent on Rotten Tomatoes and opens wide next weekend.

Fox Searchlight released “The Shape of Water” at two locations in New York, and has earned the highest PSA of the weekend with $83,400 for a total of $166,800. The film, which also has a 95 percent RT score, follows a meek mute woman who works as a janitor at a government research facility and falls in love with the institute’s main test subject: a captured sea creature. Del Toro directed the film from a script he co-wrote with Vanessa Taylor. Sally Hawkins stars with Michael Shannon, Richard Jenkins, Doug Jones, Michael Stuhlbarg, and Octavia Spencer.

Finally, Amazon Studios released “Wonder Wheel” as their first film without a co-distributor. Unfortunately, with a 41 percent RT score the film is underperforming with $140,555 from five screens for a PSA of $28,111. For a film with Oscar hopes, a limited release needs to have a PSA of over $50,000 in order to gain traction. With such weak performance against much better critically received films, “Wonder Wheel” is likely to fall out of the box office and awards race picture.