Dish Network said Monday it reached an agreement that will keep the Weather Channel in its lineup, according to the Associated Press. Details were not released.

The satellite TV company has backed off on threats to launch its own weather-related programing.

Dish said it will work with the Atlanta-based Weather Channel Cos. to provide new localized forecasting services designed specifically for satellite customers.

CNN in June will present four documentaries, reported by Dr. Sanjay Gupta and Soledad O’Brien, covering issues including the effect of toxic chemicals on our health, a gay couple’s journey to marriage and a baby and an investigation into a shocking crime story.

“At a time when the broadcast and cable news networks have essentially walked away from true documentary development, CNN will continue to invest in enterprise and investigative reporting, which we think is critical to the future of quality journalism,” CNN/U.S. president Jon Klein said Monday in a statement. “Too often, the other cable news networks either ignore these important topics or reduce them to a partisan argument. Our goal is to offer in-depth documentaries that will inspire smart, thoughtful conversation and debate on significant topics that affect our rapidly changing nation every day.”

Chief medical correspondent Gupta reports a two-night investigation into “Toxic America” on June 2-3 at 8 p.m. The first part, “Toxic Towns, USA,” grew out of Gupta’s yearlong investigation of Mossville, La., which is surrounded by 14 chemical plants and where more than eight in 10 residents report serious health problems. Gupta challenges manufacturers, the Environmental Protection Agency and the Centers for Disease Control and Prevention to explain how residents can live safely in the shadow of chemical plants that spew tons of cancer-causing agents into the atmosphere every year. In “Toxic Childhood,” on June 3, he reports on how potentially harmful chemicals exist in our air, homes and in the products we use every day and offers guidance on how we can minimize these risks in our lives.

O’Brien investigates the two-year siege of fear that gripped Atlanta in “The Atlanta Child Murders” on June 10 from 9-11 p.m. It’s almost 30 years since the murders of more than 25 black children, teens and young adults, and O’Brien has exclusive access to convicted killer Wayne Williams, who’s still protesting his innocence from behind bars.

For Father’s Day, Gupta returns with two-part special “Dads for My Daughters,” June 19-20 at 8 p.m. Best selling author Bruce Feiler, after being diagnosed in 2008 with a rare and aggressive cancer called osteosarcoma, decided to form a “Council of Dads” for his twin daughters. He enlisted his closest male friends to, in effect, take his place as father to his girls should he not make it.

O’Brien reports on a gay couple trying to have a baby that has both a biological and a legal connection to both men. In “Gary & Tony Have a Baby,” airing June 24 at 8 p.m., Gary Spino and Tony Brown spend a small fortune hiring an egg donor and a surrogate and face a string of court battles.

The duo have taken over writing duties on the Sony Pictures Television project, which is being developed for a potential midseason launch if its pilot is picked up.

The duo, who launched “Smallville” and ran it for seven seasons, replace Josh Friedman, who initially was hired to adapt “Angels.”

As the oil spill off the Louisiana coast grows ever larger, National Geographic Channel premieres the 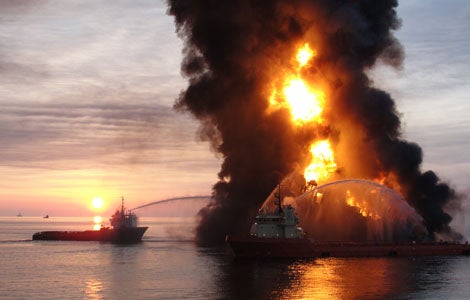 With exclusive footage from the U.S. Coast Guard from the site of the original oil rig explosion, as well as from NGC’s production crew and the on-site salvage company, the program presents the first 36 hours after the explosion. Eyewitness interviews and CGI analysis of the rig also help tell the tale of the environmental disaster’s origins.

Designer Jillian Harris, performer Xzibit and Leigh Anne Tuohy, the woman portrayed by Sandra Bullock in “The Blind Side,” join ABC’s “Extreme Makeover: Home Edition” when it returns for its eighth season during the 2010-11 broadcast season.

Harris (“The Bachelorette”) first volunteered on the series for the episode that aired March 14, meeting the Skaggs family of Slaughterville, Okla.

Xzibit (“Gridiron Gang”), who volunteered on the show three times, first appeared in the episode that aired Oct. 11, 2009, helping to rebuild the fire-damaged, deteriorating Connecticut home of the musical Hill family.

It’s going to be an Alex O’Loughlin summer.

Now CBS is bringing back this season’s “Three Rivers,” which hasn’t aired since November and was canceled in January.

But it’s summer burnoff season, and maybe the show will build a little interest in O’Loughlin’s upcoming “Hawaii Five-0,” launching this fall on CBS.

Pittsburgh-set medical drama “Three Rivers” returns on Saturdays at 8 starting June 5, according to the Futon Critic.

TLC premieres the third season of “I Didn’t Know I Was Pregnant” on Wednesday, June 9, at 9 p.m. ET/PT.

As the title promises, the show reveals the stories of women who conceive and carry their babies all the way to labor and delivery, while never even knowing they were pregnant.

This season includes doctors and experts who help shed light on these medical mysteries. Each episode also will include questions and quizzes that will further engage viewers.

Stories this season include a woman who goes into labor while on a boat in the middle of open water; a new mother still nursing who discovers she is pregnant with a baby as she delivers it into her shoe; a woman who loses more than 80 pounds after gastric bypass surgery and then realizes the movement in her stomach is more than just the effects of her procedure; and a microbiologist who’s shocked when she learns the truth behind her strange, unexplained symptoms after two pregnancy tests come up negative.

History kicks off the second season of “American Pickers” on Monday, June 7, at 9 p.m. ET.

Mike Wolfe and Frank Fritz return to searching America’s back roads, junkyards and barns for “rusty gold.” They comb through memorabilia and artifacts, hoping to find treasures among the trash, or at least a good story.

History said it was the No. 1 new cable series of 2010, averaging 3.8 million total viewers per episode in its debut season.

Part sleuths, part antiques experts, part cultural historians, Mike and Frank start the season in North Carolina, where their finds include a 1950 Studebaker and a 1934 pre-Airstream trailer.

Meanwhile, back in Iowa, Danielle Colby Cushman holds down the fort at Antique Archaeology.

From the press release: While their worlds may never collide, the “Summer by Bravo” campaign features Bravo talent including Kathy Griffin and Rachel Zoe acting as their own paparazzi; Tom Colicchio getting friendly with the "Real Housewives;" Jeff Lewis sipping Bravotinis; Patti Stanger canoodling with a tiger; and Jenni Poulos doing cannonballs into the pool, among others.

The latest installment in the animated comedy series follows “Total Drama Island” from Camp Wawanakwa and Hollywood-set “Total Drama Action.”
Seventeen contestants – a mix of favorites from the past and new faces — will duke it out on an international playing field for a grand prize of $1 million. Host Chris McLean and cohort Chef take advantage of the world’s most famous landmarks and natural wonders as backdrop to “Total Drama’s” signature painful and embarrassing challenges.

As Cartoon puts it:

Chris will fly the gang around the world on the Total Drama Jumbo Jet, equipped with a massive cafeteria, guys’ and girls’ bunk areas, a galley kitchen for Chef and, of course, a Cockpit Confessional. In each episode, the jet will land in a new and exotic location. Alliances, backstabbing and more than a few tender moments will play out onboard. Where they’ll land is anyone’s guess and only Captain Chris McLean knows for sure. To add even more intrigue, at some point in each episode the cast will spontaneously break into a musical number.

The new global challenges are more gut-wrenching than ever before, ranging from bungee-jumping off the Eiffel Tower to going over Niagara Falls on homemade rafts. Elimination is far scarier than a trip in the Lame-o-Sine: this time, the losing contestants will have to take a high-altitude "Drop of Shame," getting kicked out of the Total Drama Jumbo Jet midflight. Good thing they have been supplied with parachutes.
“Total Drama World Tour” is produced by London-based Cake Entertainment.