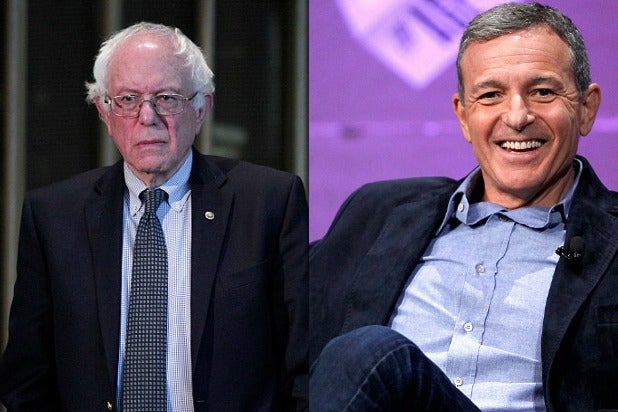 Disney CEO Bob Iger erupted in frustration against Bernie Sanders’ attacks on Disney’s low wages and Iger’s sky-high salary, asking in a private Facebook post obtained by TheWrap:  “How many jobs have you created?”

“To Bernie Sanders: We created 11,000 new jobs at Disneyland in the past decade, and our company has created 18,000 in the US in the last five years. How many jobs have you created? What have you contributed to the US economy?” 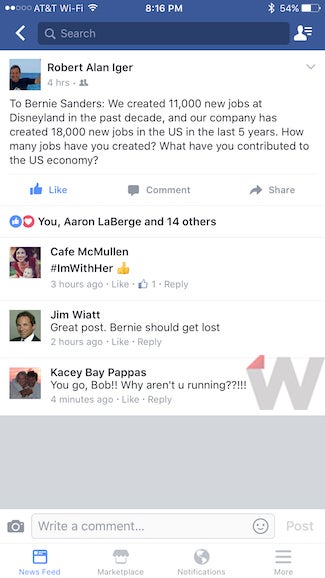 On Tuesday, Sanders launched into a broadside attack on the Walt Disney Co. during an Anaheim Convention Center rally filled with 1,500 supporters.

“Anybody make a living wage working for Disney?” Sanders asked. “It’s an example of what we’re talking about when we talk about a rigged economy.”

Sanders went on to claim that “Disney pays its workers wages that are so low that many of them are forced to live in motels because they cannot afford a decent place to live.” He added, “People are asking is it right that at Disneyland you have a CEO making $46 million while they’re paying their workers starvation wages.”

Sanders also attacked Disney, which made a record $2.9 billion in the first quarter of this year, for sending jobs overseas.

“It would be very nice of the Disney corporation to start building factories in the United States,” Sanders said.

A Disney spokesperson told TheWrap in a statement that, “Mr. Sanders clearly doesn’t have his facts right. The Disneyland Resort generates more than $5.7 billion annually for the local economy, and as the area’s largest employer has added more than 11,000 jobs over the last decade, a 65% increase.  These numbers don’t take into account our $1 billion expansion to add a Star Wars-themed land, which will create thousands of additional jobs across multiple sectors.”

Iger has contributed $2,700 to Clinton’s presidential campaign, the maximum allowed by law, according to OpenSecrets.org.