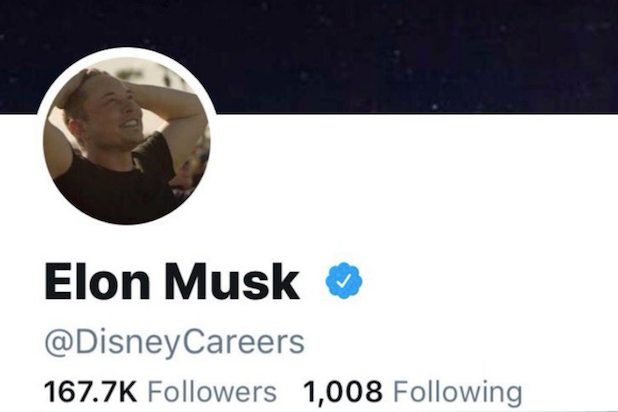 The Twitter account for Disney Careers was briefly taken over Sunday by an Elon Musk impersonator who changed the account’s avatar and name to the tech billionaire and began posting Musk-like content to more than 167,000 people.

“I’m giving away 10,000 BTC to the Tesla community,” blared one post. “I’m leaving the post of director of Tesla due to the recent decision of the SEC. All users can take part in the giveaway. Thank you for your support.”

Another post contained no words but was just a collection of various memes and an image of Michael Douglas speaking on a very large cell phone from “Wall Street.”

The possible hacking was first brought to wide attention by journalist Yashar Ali. The @DisneyCareers handle was clearly visible throughout the episode.

A rep for Disney did not immediately respond to inquiries from TheWrap about what may have taken place.

If it was a hacking, however, it certainly would not have been the first to plague prominent users and accounts on the site. In recent months, a number of influential cable news personalities have been hacked by pro-Turkey activists.

Among the victims have been Eric Bolling, Brit Hume, Sheriff David A. Clarke, Jr, and even longtime New York Times reporter Clyde Haberman. When former Fox News personality Greta Van Susteren was hacked, the intruders used her account to send direct messages on the platform to President Trump.

Twitter does not comment on individual accounts, but hackings are usually resolved quickly for major platform users. The Disney Careers issue — whatever it was — appears to have been resolved within hours.