No, we’re not just trying to be SEO-friendly. (Though if the shoe fits …) It’s actually time for some Disney Channel news.
The network Wednesday held its upfront presentation in New York, offering up a flurry of announcements. Some (heavily edited) bullet points, taken directly from the Disney PR machine (the Imagine-tronic 3000?)
See how many JoBros projects you can spot: 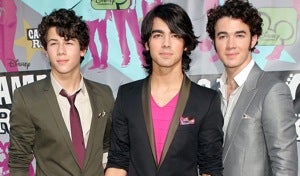 – "Phineas and Ferb:  Across the Second Dimension" – The #1 animated series for the past two years among Kids 6-11 and Tweens 9-14, has inspired a television movie to premiere in summer 2011 on Disney XD and Disney Channel.  In the movie, Phineas and Ferb discover that their beloved pet platypus, Perry, is really a secret agent who battles the forces of evil daily.
–"The Avengers: Earth’s Mightiest Heroes" – Further aligning the strength of Marvel’s hugely popular characters and stories with the burgeoning Disney XD brand and global reach, an all-new animated series, "The Avengers: Earth’s Mightiest Heroes," will debut in fall 2010 on Disney XD and DisneyXD.com. A 20-part "micro-series" that focuses on each hero’s backstory will roll out in fall 2010 on Disney XD immediately followed by the series premiere on Disney XD in the U.S. and shortly thereafter, around the world.
– "Pair of Kings" – This live-action, wish-fulfillment comedy series, scheduled for a fall 2010 premiere, follows two fraternal twins who are living a typical teenage life in Chicago until they discover they’re the successors to the throne of the tropical island of Kinkow. Starring are popular actor and Walt Disney Records recording artist Mitchel Musso ("Hannah Montana," "Phineas and Ferb") and Doc Shaw ("The Suite Life on Deck," "Tyler Perry’s House of Payne").
– "Camp Rock 2 The Final Jam" – Disney Channel’s big event of summer 2010 is "Camp Rock 2 The Final Jam," a "break into song" musical sequel to the hit Disney Channel Original Movie "Camp Rock," cable TV’s #1 entertainment telecast of 2008 in Total Viewers (10.1 million) and TV’s #1 entertainment telecast in Tweens 9-14.  Among TV’s live action movies, it was #1 among Kids 6-11 for the year.
– "Avalon High" – Scheduled for a late fall 2010 premiere, this Disney Channel Original Movie, based on the popular novel by Meg Cabot, follows Allie who, after transferring to Avalon High, is shocked to discover that her new classmates are reincarnations of King Arthur and his Court.
– "Den Brother" – Debuting in summer 2010, this comedic Disney Channel Original Movie stars Hutch Dano (of Disney XD’s "Zeke and Luther") as a teen hockey star who must swallow his pride and step in to be substitute leader of his little sister’s Bumble Bee Troop.
– "16 Wishes" – This movie comedy, starring Debby Ryan (Disney Channel’s "The Suite Life on Deck") and Jean-Luc Bilodeau (ABC Family’s "Kyle XY"),  tells the story of Abby, a girl who’s been eager to reach her 16th birthday and has kept a secret wish list since she was a little girl.  But, when the big day actually arrives, she makes a wish that changes everything.
– "JONAS" — The second season of the Teen Choice Award-winning comedy series, "JONAS," starring global sensations Kevin, Joe and Nick Jonas and popular actresses Chelsea Staub and Nicole Anderson, will debut in summer 2010. The new season finds Kevin, Joe and Nick Lucas spending a summer in Hollywood. The guys have rented a Hollywood Hills house and will experience a summer like no other when their relaxing vacation turns into three life-changing opportunities: Joe lands a prized role in a big Hollywood film, Kevin indulges his newfound passion for the movie business by shadowing a famous director, and Nick takes up surfing and feverishly works on his first passion – writing songs for the new JONAS album.
x
Looks like you're enjoying reading