Disney used its two-hour presentation window at the annual CinemaCon convention in Las Vegas to show off a handful of trailers including a stunning new look at “Tomorrowland,” as well as debut Pixar’s latest animated movie “Inside Out.”

While full reviews of “Inside Out” are under embargo, the high-concept film is among Pixar’s most thematically mature and emotionally complex films, as it follows a young girl’s emotions — Joy, Sadness, Anger, Fear and Disgust — as they compete for control of her mind. Kids will no doubt take to it, and adults may find themselves shedding a tear, as this reporter did in the film’s final minutes.

“Inside Out” isn’t the only Pixar offering this year, as for the first time ever, Disney will release a second film from the animation studio in November — “The Good Dinosaur.” Disney did not show a trailer for that film, which may prove to be more kid-friendly than “Inside Out,” but it did give the audience at Caesar’s Palace a brief glimpse at footage.

Disney’s executive VP of distribution, Dave Hollis, led the studio’s presentation, which showcased a new trailer for Brad Bird‘s “Tomorrowland.” The spectacular spot featured much more action than the initial teaser, which was designed to convey a sense of wonder. It also put George Clooney front and center, where stars of his caliber belong.

Inspired by Walt Disney himself, “Tomorrowland” will be the first film to debut in Dolby Vision, though “Inside Out” will also utilize that new format. An animated short film titled “Lava” will screen in front of “Inside Out.”

As TheWrap first reported, Disney is also teaming with Fathom Events to debut “Inside Out” three days early in select cinemas on June 16. The special event will include 15 minutes of exclusive behind-the-scenes footage from Pixar Animation Studios and a Q&A with director Pete Docter, producer Jonas Rivera and Amy Poehler, who voices the lead character of Joy.

Disney also screened the most recent trailer for Marvel’s “Ant-Man,” which will be attached to prints of “Avengers: Age of Ultron.” The tagline, “heroes don’t get any bigger,” is a stroke of marketing genius.

The studio ended its presentation with the latest “Star Wars: The Force Awakens” trailer, which was shown for the first time in a proper movie theater. Hollis said the second trailer was watched 88 million times in its first 24 hours of release.

Hollis also noted that 2013 and 2014 were Disney’s best years at the box office domestically, internationally and globally. The studio is expecting an “astounding” 2015 thanks to “Avengers” and “Star Wars: The Force Awakens,” as well as the two aforementioned Pixar movies. Hollis said the studio is already off to a great start this year due to “Cinderella” before boasting that “when it comes to big theatrical event films, our lineup is unparalleled.” Then he showed a graphic to back that up, which is featured at the bottom of this story.

In addition to “Avengers,” “Tomorrowland,” “Inside Out,” “Ant-Man,” “The Good Dinosaur and “Star Wars: The Force Awakens,” Disney’s upcoming releases include Steven Spielberg‘s “Bridge of Spies” and “The BFG,” the Coast Guard drama “The Finest Hours,” Disney Animation’s “Zootopia,” Jon Favreau‘s “The Jungle Book,” sequels to “Alice in Wonderland” and “Finding Nemo,” as well as Marvel’s “Captain America: Civil War” and “Doctor Strange.”

The studio also has “Pete’s Dragon,” “Moana,” “Beauty and the Beast,” “Star Wars: Rogue One,” “Star Wars: Episode VIII,” “Guardians of the Galaxy 2,” “Toy Story 4,” “Pirates of the Caribbean 5” and DreamWorks’ “Ghost in the Shell” on the horizon. That’s a lot of brand power for one of the most recognizable brands in the world. 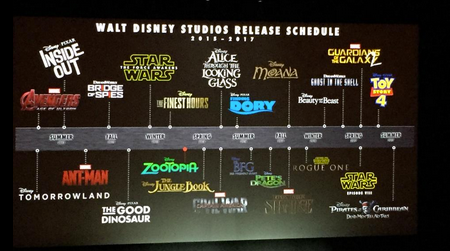