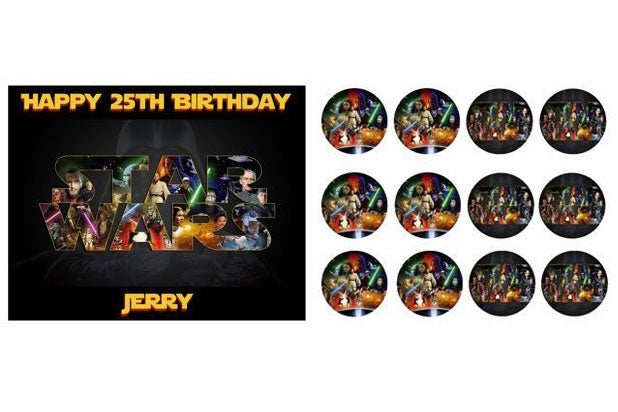 The empire is striking back — against a couple of people who sell cake frosting sheets online.

Disney Enterprises, Marvel, Lucasfilm and Sanrio (the company that brought the world Hello Kitty) have teamed up to sue an online merchant of “edible cake frosting sheets and related items.”

Specifically, the entertainment giants are taking aim at George and Danielle Wilson, who flog their sugary wares online under the names WilsonsWildCakeCreations and WilsonCakeImaging, the lawsuit claims.

The suit claims that the Wilsons make unauthorized cake frosting sheets and other products bearing “substantially identical likenesses” of the plaintiffs’ intellectual properties.

For those keeping score at home, the collective suing companies own the rights to a staggering number of highly lucrative properties that include not just Hello Kitty but the Marvel universe of superheroes, the “Star Wars” universe and Mickey Mouse and his band of merry animated pals.

In short, they’re doing OK for themselves — but they will not stand for the Wilsons allegedly taking an illegal bite out of their bottom lines.

“This case concerns the concerted, systematic and wholesale theft of various world-famous intellectual properties owned by Plaintiffs,” the lawsuit, filed in federal court in California, reads.

According to Disney, et al, the defendants have been sent a cease and desist letter, to no avail — so now it’s suin’ time.

Alleging copyright infringement, trademark infringement and — cough, cough — unfair competition, the assembled companies are asking that the Wilsons be blocked from infringing on their properties. They also want any infringing material destroyed or otherwise disposed of.

Oh, and money. They also want money. Disney and the other plaintiffs are asking for “actual damages increased to the maximum extent permitted by law and/or statutory damages at Plaintiffs’ election.” Along with any money that the Wilsons made off of any infringing products.

It’s unclear how much money the entertainment giants stand to collect; a May post on the Wilsons’ Facebook page proudly declares, “Sale #800!”

Maybe the Wilsons can let them eat cake instead.