While the rest of America was doing its last-minute turkey shopping, the Walt Disney Co. was taking out the trash.

On Wednesday, Disney revealed in an SEC filing that it had suffered major subscriber losses across all its U.S. cable networks. ESPN reported just 92 million customers in 2015 — a loss of 7 million since 2013. On Monday, Disney stock dropped $1.62 per share.

Those lost subscribers reflect a trend across cable, where most ad-supported networks have been hit by similar declines. But the reverse has been true in streaming video, where subscription services have experienced major growth.

The biggest streaming company of all, Netflix, has a long way to go before it catches ESPN, the most profitable of all cable networks ($6.61 per pay TV subscriber, according to SNL Kagan) — but it’s making strides.

In its October third quarter earnings report, Netflix claimed 42 million domestic subscribers — up 40 percent from the same period in 2013.

It’s unlikely that Netflix will be able to sustain that rate of growth. As its subscriber base increases, Netflix would have to add greater raw numbers of subscribers to stay in the 40 percent range. And there have been signs that subscriber growth in the U.S. may be slowing. Domestic subscriptions fell short of analyst expectations for the third quarter, and Netflix has been emphasizing international growth of late.

But if Netflix can continue to add 12 million new U.S. customers and ESPN were to lose 7 million every two years for the foreseeable future, the streaming service would overtake the sports channel by 2021, claiming 78 million subscribers to ESPN’s 71 million. 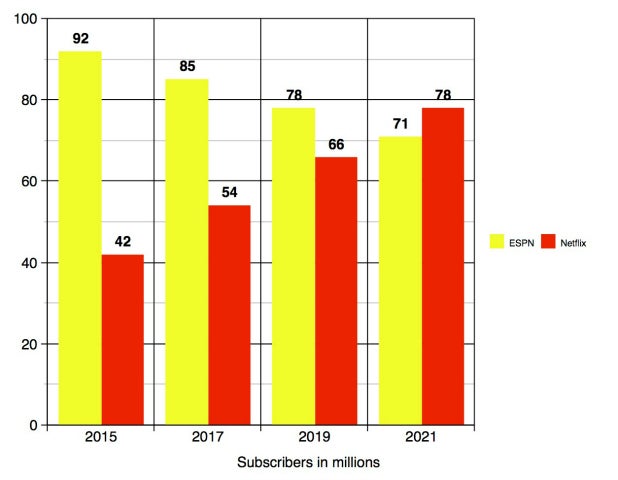 That assumes that current trends stay as they are — which is by no means a certainty.

For one thing, Netflix faces increased competition in subscription video from companies such as CBS and YouTube. And consumer behavior is likely to change with the rise in TV sports rights and the expansion of so-called “skinny bundles” allowing viewers to subscribe to small numbers of cable channels over broadband.

And Netflix and ESPN aren’t the only companies navigating those opposing trends. Disney’s other cable channels all reported between 4 and 5 million lost subscribers from two years ago. Other major network groups — including NBCUniversal, Viacom and Turner — have also lost customers.

Meanwhile, streaming service Hulu reported 9 million U.S. subscribers in 2015, up from 5 million two years ago. That’s an impressive gain, but it’s not even close to the 25 million viewers who get ESPN Classic, Disney’s least-subscribed channel. And Hulu, like Netflix, is an a la carte service that consumers subscribe to directly. ESPN still reaches consumers primarily as part of a larger bundle sold by cable providers.

But growth in subscription streaming and declines in ad-supported cable aren’t trends that are likely to go away anytime soon. During a fourth-quarter conference call last month, Disney CEO Bob Iger himself hinted that the company will follow fellow legacy media companies CBS and HBO in launching an owned-and-operated U.S. streaming service in the near future. A British version called DisneyLife premiered in October.

“We wanted to test this in a market where there was strong brand affinity,” Iger said of DisneyLife, adding that existing content deals in the U.K. made it easier to populate the service with Disney content there. “When you look at technology today… the app experience is, I’ll call it a 3D experience versus the 2D experience that linear television offers.”