Disney plans to build Disney/ABC Studios, a high-tech, 12-soundstage production facility on 56 acres at the Ranch in Santa Clarita Valley. 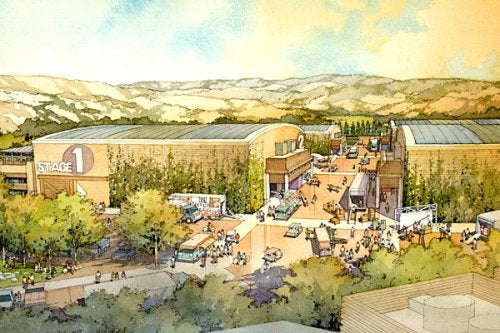 Construction of the project is expected to create more than 3,000 new jobs in the area and bring in $522 million in direct economic activity in L.A. County, according to Disney, which has already filed its building applications with Los Angeles County. When the facility is completed, it’s projected to create more than 2,800 full-time and part-time jobs, bringing in new annual revenues of $26 million to the state and $1.3 million to the county.

Winning approval from the county could take 18 to 24 months. If that process proceeds smoothly, the earliest the project would be completed is 2013, Disney said.

The project will employ green design and building techniques, with the goal of achieving Leadership in Energy and Environmental Design (LEED) certification. Green walls, solar panels and cool roofs will be used to reduce energy use, while native and drought-tolerant landscaping will help to minimize water use.

Golden Oak Ranch, one of the largest movie ranches still operating in Southern California, has been owned by Walt Disney Productions since 1959. It averages more than 300 days of filming annually, Disney said.

The 890-acre movie ranch has been used to shoot Disney films ranging from “Old Yeller” to “Pirates of the Caribbean.” It also has hosted television shows including “Lassie,” “Murder, She Wrote,” “The X-Files,” “CSI,” “Sons of Anarchy” and “American Idol.”

The breakdown of Golden Oak Ranch will be 56 acres for the proposed Disney/ABC Studios at the Ranch; 195 acres of outdoor filming/movie ranch; and 639 acres of natural backdrop area.