Disney provided sneak peeks at upcoming films “Toy Story 4,” “Alice Through the Looking Glass,” “The Good Dinosaur,” “Coco” and more at its D23 Expo 2015 on Friday.

Lasseter then introduced the director of “Toy Story 4” — namely himself — and announced that the next installment in the “Toy Story” franchise, due June 2017, will be a love story between Sheriff Woody and Bo Peep.

“I’m very proud of our films,” Lasseter said. “When we made the first three ‘Toy Story’ films, we didn’t realize what we had done was to change the genre of each of the films’ story. For ‘Toy Story 4,’ we are doing a type of story we have not done before: a love story.”

“This is honestly a dream come true,” gushed Rashida Jones, co-writer of the new film with Will McCormack. 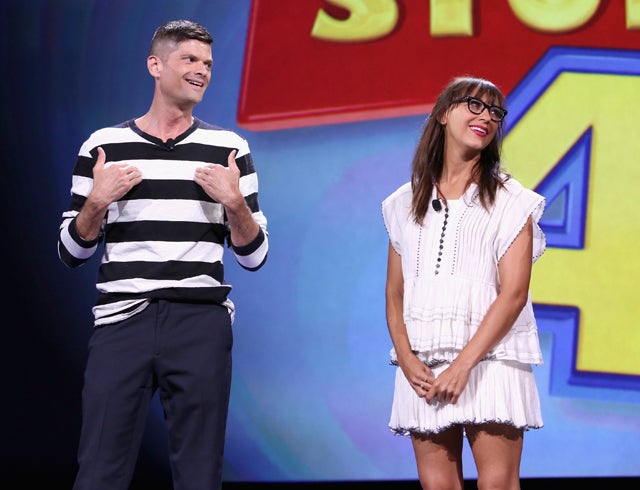 Two-time Oscar-winning songwriter and longtime Pixar collaborator Randy Newman took the stage to perform his award winning song from the “Toy Story” soundtrack “You’ve Got a Friend in Me.” Newman’s Pixar credits also include “A Bug’s Life,” “Toy Story 2,” “Monsters, Inc.” and “Cars.”

In the film, a spirited 12-year-old boy in rural Mexico, Miguel, sets off a chain of events that forever changes his fate on the eve of Día de los Muertos.

“I started to see the potential for telling a fun yet powerfully emotional story in this film,” said Unkrich, who directs the film. “We are really excited about what we’ve come up with.”

He also noted that filmmakers took several trips to Mexico to see how the holiday was celebrated.

“As artists and filmmakers, we couldn’t help but be drawn to the striking visuals of Día de los Muertos,” said Unkrich and Anderson. “But it was the celebration’s core themes of family, remembrance and connection across generations that resonated within and truly inspired us. Dia de los Muertos is as singular as the Mexican culture, while at the same time completely universal in its message.

“In our story, the celebration of Día de los Muertos serves as the perfect backdrop for our main character to ask where he comes from, what his place is within his family, and how families stay woven together across time through the simple act of remembrance,” the filmmakers said.

Earlier in the day, Walt Disney Studios published teaser posters from “Alice Through the Looking Glass,” due on May 27, 2016.

“The Good Dinosaur” director Peter Sohn and producer Denise Ream debuted new footage of a trio of T-Rexes. The film is slated for Nov. 25, 2015, release.

As TheWrap previously reported, “Pirates of the Caribbean” franchise star Johnny Depp made a surprise appearance at the event, becoming a member of the 2015 class of Disney Legends.

“This is so exciting, for me … I can’t tell you, oh you do know,” Ellen DeGeneres said, as she revealed that she has been begging for a “Finding Nemo” sequel for years and long complained about it on her talk show.

Dwayne “The Rock” Johnson also surprised fans, making an appearance to  to speak about his upcoming film “Moana,” in which he will play legendary demi-god Maui.

“He is very strong, he’s powerful, he’s determined and relentlessly, achingly handsome. But deep down, he’s always been someone stuck in the middle. In the story, Moana might just be the person to help Maui find his true self,” said the actor.

Disney also revealed a sneak peek at “Inside Out” short film “Riley’s First Date,” announced pop singer Shakira has joined the voice cast of “Zootopia” and said it will produce its version of “Jack and the Beanstalk,” titled “Gigantic,” which is slated for 2018 release.