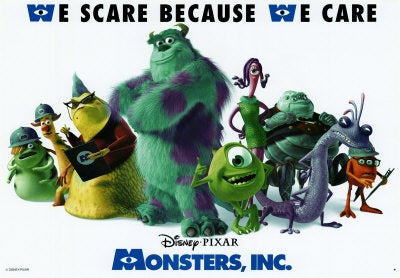 Disney has announced a sequel to "Monsters Inc.," a Pixar release that grossed $525.4 million globally back in 2001.

Presenting to a group of reporters Thursday on the Disney lot in Burbank, Calif., studio chairman Rich Ross also announced a Nov. 16, 2012, release date for the Pixar follow-up.

No director has yet been named.

Additionally, Disney has slotted a release date of June 15, 2012, for Pixar’s "Brave," which is the new title of Brenda Chapman’s "The Bear and the Bow."

The film, billed as Pixar’s first fairy tale, will feature the voice of Reese Witherspoon as a Scottish princess named Merida.

Ross also announced the targeted tentpole "Prom," a John Hughes-esque film aimed at the adolescent market. No release date has been announced.

As for Disney’s Joe Roth-produced "Wizard of Oz," Ross confirmed there is a script but no actors currently attached, and that the project is a long way from being greenlit.

Ross noted that the studio also has a "Muppets" movie in pre-production that is close to being greenlit. Studio officials are hoping the film will rejuvenate the Muppets franchise.