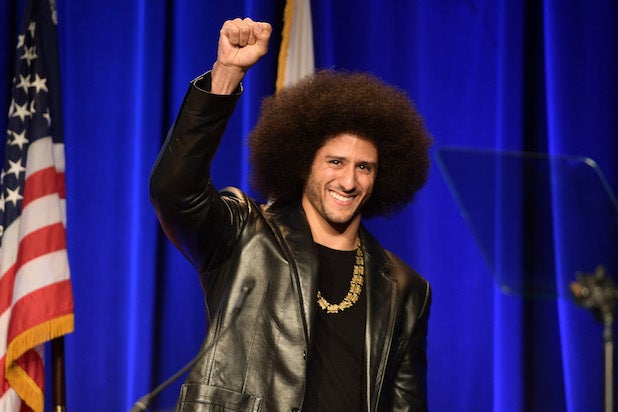 The Walt Disney Company has signed a first-look deal with Colin Kaepernick and his production arm, Ra Vision Media.

The partnership will focus on telling scripted and unscripted stories that explore race, social injustice and the quest for equity, and per ESPN “provide a new platform to showcase the work of Black and Brown directors and producers.” The deal encompasses multiple Disney platforms including ESPN, Hulu, Pixar and The Undefeated, the company’s website focused on sports and culture.

The first project in development as part of this deal is an ESPN-produced docuseries chronicling Kaepernick’s journey. Using extensive new interviews and a never-before-seen archive that documents his last five years, Kaepernick will tell his story from his perspective. Libby Geist, Kevin Merida and Connor Schell will executive produce for ESPN. Former ESPN staffer Jemele Hill will also be a producer.

“During this unprecedented time, The Walt Disney Company remains committed to creating diverse and inclusive content that resonates and matters,” said Disney executive chairman Bob Iger. “Colin’s experience gives him a unique perspective on the intersection of sports, culture and race, which will undoubtedly create compelling stories that will educate, enlighten and entertain, and we look forward to working with him on this important collaboration.”

In 2016, Kaepernick began kneeling during the playing of the national anthem before NFL games to protest police brutality against minorities and racial injustice. That was Kaepernick’s final season in the league, though there has been increased optimism that he could find his way back in light of the NFL’s stronger stance on combating systemic racism.

“I am excited to announce this historic partnership with Disney across all of its platforms to elevate Black and Brown directors, creators, storytellers, and producers, and to inspire the youth with compelling and authentic perspectives,” said Kapernick. “I look forward to sharing the docuseries on my life story, in addition to many other culturally impactful projects we are developing.”

Netflix is already giving Kaepernick’s life the scripted treatment, with Ava DuVernay producing a series based on his high school years.

The six-episode limited series, which will focus on the former San Francisco 49ers quarterback’s high school years, will be narrated and executive produced by Kaepernick. “Colin in Black & White” follows Kaepernick’s early life as a Black child growing up with a white adopted family. It will chronicle Kaepernick’s football journey during the same years he spent defining his identity, according to Netflix.