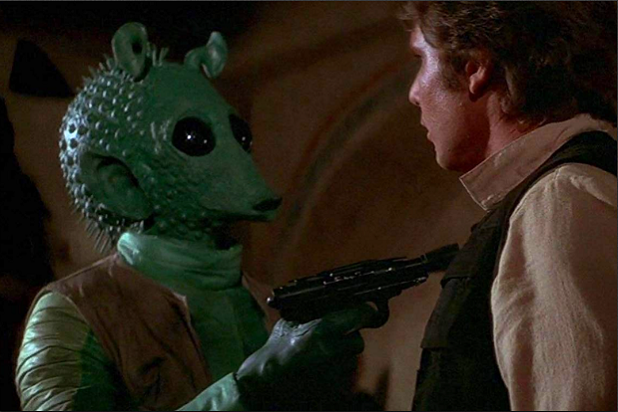 With its launch earlier today, Disney+ added its “Star Wars” catalog, including a new version of “Star Wars: A New Hope” that updated the “Han Solo Shot First” showdown with alien bounty hunter Greedo in the infamous Mos Eisley Cantina scene for the fourth time.

A rep for Lucasfilm confirmed to TheWrap that the change in the scene was something George Lucas did before he sold Lucasfilm to Disney in 2012 for over $4 billion.

Well, they've done it again. #DisneyPlus appears to have altered the infamous Han and Greedo scene from #StarWars. See for yourself. pic.twitter.com/6aGqwoOrzF

The intergalactic smuggler might have shot first in the original 1977 theatrical release, however, in the version which is on Disney+, Greedo gets the last word in before being blown away by Solo. The word that Greedo utters? It sounds like “Maclunkey!” Oddly enough, the “Maclunkey” line has no subtitles.

The “Did Han shoot first?” scene has been hotly debated amongst the “Star Wars” fandom for over four decades. When the 1997 special edition of the film was released, Lucas edited the scene to make it seem like Greedo shot first, which made Solo look less like a coldblooded killer to the annoyance of “Star Wars’ fans. When the original trilogy was released on DVD in 2004, the scene was changed yet again to show Greedo firing his blaster a second before Solo killed him.