Stock of the Walt Disney Company closed Friday at a record $175.72, growing $21.03 per share or +13.59%. The surge started on Thursday evening, as soon as Disney unveiled some impressive streaming-subscriber numbers. The company later laid out very optimistic guidance for its future, and as a result, the momentum on Wall Street did not slow down all the way through Friday.

At its Friday peak, Disney stock knocked on the door of $180 per share.

Disney’s market cap is now north of $318 billion, leaving Netflix’s $222 billion looking like chump change. (OK, maybe not.) Market capitalization is the total dollar value of a company’s outstanding shares of stock in the market.

Yes, Wall Street was pretty impressed by the company’s streaming-subscriber updates — and all of those other many, many announcements — and no one seems all that concerned about increasing prices.

While the valuation is soaring, so is the spending. Disney+ spent about $2 billion on content in 2020, according to CFO Christine M. McCarthy. The company now forecasts that content spend to grow to between “$8 and $9 billion” in 2024, she said — especially with the inclusion of the streaming service’s sixth brand, Star, which will have a giant international presence.

The previous guidance for that year’s content-spend was about half of the new high end.

Disney+, which launched in November 2019, expects to hit peak losses next year and be profitable in fiscal 2024, the company’s chief financial officer said.

That made everyone seem to forget about that whole our-parks-are-mostly-closed-due-to-coronavirus thing, just as the Bobs — CEO Chapek and Chairman Iger (pictured above) — planned.

See a snapshot of Disney’s trading day below. We went with a five-day look to best emphasize the giant jump. 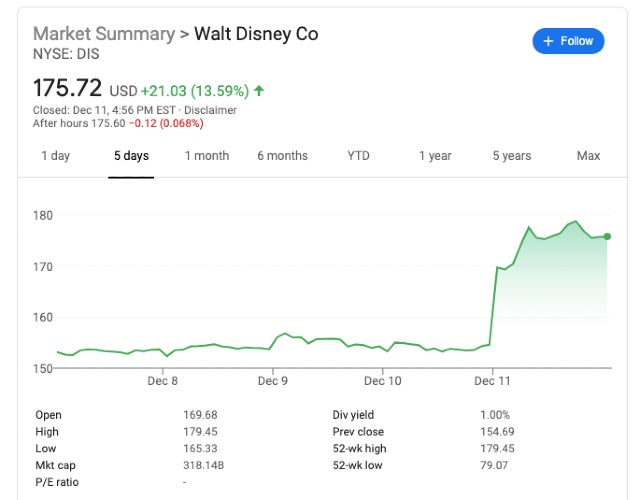