Shareholders in The Walt Disney Company aren’t ready to say goodbye to Bob Iger. Unfortunately, the clock has struck midnight, the fairytale is ending, and Iger is turning over his day-to-day management duties to Parks boss Bob Chapek. And Wall Street’s immediate reaction made a bad day for Disney’s share price even worse.

During the regular U.S. trading day, Disney stock (DIS) dropped almost $5 per share, or nearly 4%, to close at $128.19 per share. Disney announced Iger’s plans at 4 p.m. ET, just as the market closed. Following a call with Disney executives soon after the announcement, Disney’s share price dipped another few bucks in after-hours trading. See below: 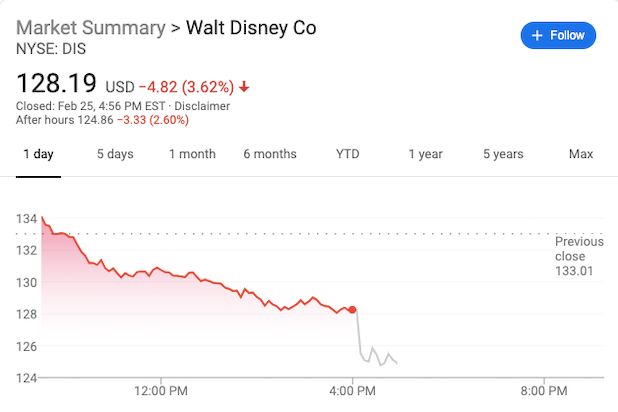 Iger will remain with Disney in a creative capacity. His contract ends on Dec. 31, 2021.

Chapek is a longtime Disney employee who brings 27 years of leadership experience across Disney’s parks, consumer products and studio businesses. He was among the three top Disney executives in the running for the top job, along with Kevin Mayer and Peter Rice.

Earlier this month, Disney reported Chapek’s division brought in $7.4 billion during the holiday quarter, marking an 8% increase from the year prior.

As chairman of the parks, experiences and products division, Chapek oversaw the Disney’s largest business segment, with operations around the globe and more than 170,000 employees worldwide. Prior to that he was chairman of Disney parks and resorts since 2015.

Iger will now assume the role of executive chairman and direct Disney’s creative endeavors, while leading the company’s board and providing the full benefit of his experience, leadership and guidance to ensure a smooth transition.