Disney stock had a tough start to trading on Monday, the first full stock market day after the company revealed the most recent subscriber losses of its cable channels.

Company stock (DIS) dropped more than a buck and a half per share right off the bat this morning, equivalent to a 1.31 percent decline.

On the day after the markets were closed for Thanksgiving, shares slid to the depths of $113.79 apiece before recovering to $115.11 per share by the time the stock markets closed on the shortened day. At the time of this initial publishing, DIS stock was trading even lower than that recent Black Friday bottom, as readers can see below.

Before the bad news dropped late on Wednesday, DIS had closed at $118.68 per share. Disney has lost about 7 million subscribers across its cable networks since 2013, per the recent regulatory filing.

Here is where DIS stood after about 21 minutes of opening trading on Monday; the stock has since rallied a bit. 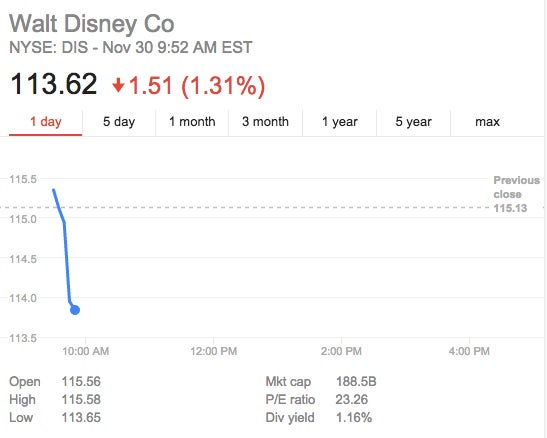