Disney’s “A Wrinkle in Time” has been selected to receive part of $109 million in tax credits, according to the California Film Commission.

A total of 28 feature film projects have just been selected.

In its second year, the tax program has been updated to include eligibility for big budget “tentpole” films like the Disney production “A Wrinkle in Time,” based on Madeleine L’Engle’s classic children’s tale.

During the program’s 1.0 phase, it did not accept projects with budgets greater than $75 million. While “Program 2.0” is open to film projects of any budget, credits are capped to each studio-produced film’s first $100 million in qualified spending.

“A Wrinkle in Time” will bring $85 million in qualified spending to California, according to the CFC. Nearly 400 cast and crew members will be employed, with $44 million in wages paid to below-the-line workers.

“The California tax credit made it possible to base production in California,” said Producer Jim Whitaker.  “We considered several other locations, but felt that the spectacular landscapes and intimate, real settings found in California perfectly met Ava DuVernay‘s directorial vision for ‘A Wrinkle in Time.’ The entire crew is incredibly excited as we all appreciate the ability to come home to our families at night.”

Disney plans to film most of the movie outside of Los Angeles.

“Large-scale feature films like ‘A Wrinkle in Time’ are among the most at-risk for runaway production,” CFC executive director Amy Lemisch said. “California’s expanded tax credit program is working as intended, and this project alone will employ hundreds of in-state crew members and visual effects artists.”

The tax credit-approved movies include at least five projects (“A Wrinkle in Time,” “Friday the 13th,” “Magic Camp,” “Rogue,” and “Private Benajmins”) that will film outside of Los Angeles’ 30-mile zone.

“Program 2.0 contains provisions designed to encourage production across the state, and this latest round of film projects demonstrates that we’re achieving our goal,” added Lemisch.

The list of approved films is likely to change as some applicants may withdraw from the program. In those cases, their tax credits will be reassigned to wait listed projects.

The next application period for California’s Film & Television Tax Credit Program 2.0 is Nov. 14 through 29 for television projects.

Here are all 28 projects approved for tax credits: 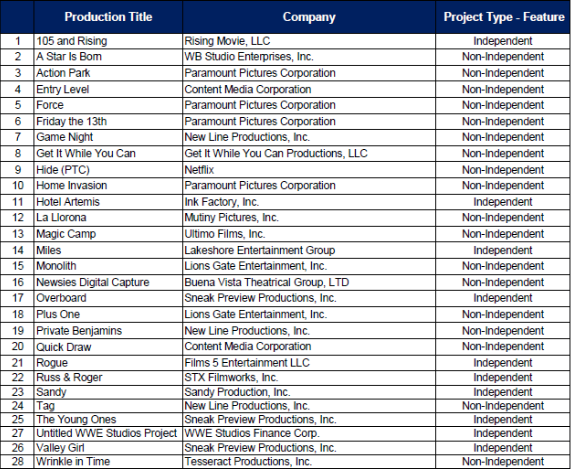