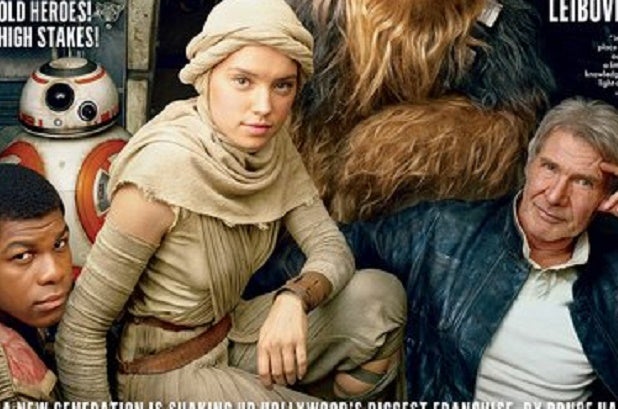 Disney has unveiled the lineup of projects it will bring to D23 Expo 2015, including an exclusive look new movies from Pixar, Marvel, Lucasfilm and Disney Animation. D23 will take place Aug. 14-16 at the Anaheim Convention Center.

Disney will unveil its animation and live-action film slates via two huge Hall D23 presentations featuring surprise guests. There will also be a “Frozen” FANdemonium musical celebration with Kristen Anderson-Lopez and Robert Lopez and the 20th anniversary celebration of Disney/Pixar’s “Toy Story” with John Lasseter and the original Pixar crew.

The force is strong with D23, as evidenced below by the full schedule and a description of its events.

After meeting the Emotions inside the mind of an 11-year-old, taking a trip to San Fransokyo, where a boy genius and his robot save the world, and falling in love with a queen with icy powers who wants to “let it go,” come see where Walt Disney and Pixar Animation Studios plan to take you next. In what has become a D23 EXPO must-see, host John Lasseter, chief creative officer of Walt Disney and Pixar Animation Studios, presents this in-depth look at the animation studios’ slate. Filmmakers will unveil never-before-seen footage from Pixar’s upcoming “The Good Dinosaur” and “Finding Dory” and Disney Animation’s “Zootopia” and “Moana.” The event will include surprise announcements, musical performances, and appearances by the films’ star voice talent.

Disney, Marvel and Lucasfilm are home to some of the planet’s best storytellers, immersing audiences fully in the world of each film from beginning to end and beyond. In this exclusive Hall D23 presentation, join Walt Disney Studios chairman Alan Horn for a tour of upcoming live-action projects from these legendary film studios. A bevy of special guests will be on hand to offer a look at an unparalleled slate that includes “Alice Through the Looking Glass,” “The Jungle Book,” Marvel’s “Captain America: Civil War,” “Star Wars: The Force Awakens” — and much, much more.

Join host Chris Montan, president, Walt Disney Music, and the Oscar-winning songwriting team of Kristen Anderson-Lopez and Robert Lopez as they take you on a once-in-a-lifetime musical journey through the world of “Frozen.” This one-day-only performance features your favorite friends from the Walt Disney Animation Studios film–including Anna and Elsa–with sing-along experiences and fascinating stories behind some of your favorite “Frozen” songs.

In Conversation with the Filmmakers and the Emotions Behind Inside Out

Get the inside story on the making of Pixar’s latest summer release “Inside Out.” Hear from Academy Award-winning director Pete Docter (“Up,” “Monsters, Inc.”) and producer Jonas Rivera (“Up”) as they reminisce and share their personal stories of creating a world that everyone knows, but no one has ever seen.

Pixar Secrets Revealed! Hear the Stories They Didn’t Want You to Know!

Ever wonder where your favorite Pixar stories began? Hear the stories you don’t know about the classic films that you love. Pixar senior development executive Mary Coleman hosts this experience, welcoming the storytellers behind some of Pixar’s most successful films, including Darla K. Anderson (“A Bug’s Life,” “Monsters, Inc.,” “Cars,” “Toy Story 3”), Mark Andrews (“The Incredibles,” “Ratatouille,” “Brave”), Ronnie del Carmen (“Up,” “Inside Out”) and Dan Scanlon (“Cars,” “Toy Story 3,” “Monsters University”), as they talk about the twists and turns of crafting a narrative and share some of the crazy story ideas that didn’t make the final cut.

From flipbooks to feature films, animation has taken audiences to fantastical new worlds, far beyond the limits of any real-world setting. Pixar Animation Studios has been at the forefront of this evolution, blurring the line between art and technology and bringing beloved characters to life with heart and humor. As we celebrate the 20th anniversary of 1995’s “Toy Story,” the first computer-animated feature film, join members of the original crew, including filmmakers John Lasseter, Pete Docter, Andrew Stanton, Lee Unkrich, Galyn Susman, Ralph Eggleston, Sharon Calahan, Eben Ostby, Bob Pauley and Bill Reeves as they share their stories and the challenges they faced along the way.

Aladdin – The Making of a Classic

Join Walt Disney Animation Studios filmmakers, including legendary directors John Musker and Ron Clements, animators Eric Goldberg (Genie) and Mark Henn (Jasmine), as well as Jasmine herself, Linda Larkin, and the two actors who gave life to the character Aladdin: Scott Weinger and Brad Kane, as they unveil the stories behind one of the great Disney classics, Aladdin, a film that led to a “whole new world” for animation.

The Shorts of Walt Disney Animation Studios: from Paperman to Prep & Landing, Feast to Frozen Fever

When Walt Disney and his brother Roy founded the Disney Brothers Studio in 1923, their first medium for storytelling was the animated short. More than 90 years later, Walt Disney Animation Studios continues this tradition, making groundbreaking and award-winning shorts including “Feast,” “Paperman” and this year’s hit “Frozen Fever.” Join the filmmakers behind these shorts and so many others, including “Get A Horse!,” “John Henry,” “Lorenzo” and “The Ballad of Nessie” for a conversation about this truly animated art form.

The Tunes Behind the Toons: Screening/Q&A

D23 EXPO invites you to a special screening and Q&A panel for The Tunes Behind the Toons, a short form documentary that celebrates the power of music in animation. From the silent film days when organists played live accompaniments, to the music within today’s animated features, this documentary traces the origins of cartoon music and its pioneers. Featuring interviews with Alan Menken, Randy Newman, Patrick Doyle, Mark Watters, Bruce Broughton, Richard Sherman and many others. Producer/director Dave Bossert will lead a star-studded Q&A following the presentation.

ON THE EXPO SHOW FLOOR:

- For the first time at D23 EXPO, Walt Disney and Pixar Animation Studios have created a joint experience no Disney fan should miss. With live demonstrations, presentations, and autograph signings with top filmmakers from each studio, plus free giveaways and interactive displays featuring the films “Inside Out,” “The Good Dinosaur,” “Zootopia,” “Finding Dory” and “Moana,” this is a can’t-miss attraction for animation fans.

- Explore costumes, props and photo ops from the Studios’ live-action films, including Disney, Marvel and Lucasfilm.

Chief Creative Officer of Walt Disney and Pixar Animation Studios John Lasseter takes Disney and Pixar animation to heart–literally. For nearly every film–from “Finding Nemo” and “Wreck-It Ralph” to “Frozen” and “Inside Out,” Lasseter has commissioned an exclusive movie-themed Hawaiian shirt. And those who know the Oscar-winning storyteller know that he loves his Hawaiian shirts–and dons one for almost every occasion. Animation fans will see their favorite film characters “materialize” before their eyes in this colorful collection, which will be exhibited on the show floor.

D23 hosts the first public exhibition anywhere of “An Animator’s Gallery: Eric Goldberg.” Celebrate Goldberg, whose artistry at Walt Disney Animation Studios began with his groundbreaking work on Genie in Aladdin, and continues to this day on projects such as the upcoming “Moana” and the 2014 Oscar-nominated Mickey Mouse short “Get A Horse!” The exhibition features a collection of more than 100 of Goldberg’s caricatured creations of Disney characters, drawn in a style reminiscent of art seen on the famed walls of Sardi’s Restaurant and The Brown Derby. This incredible collection of art is from the newly released book “An Animator’s Gallery: Eric Goldberg Draws the Disney Characters,” and will be available for purchase in the Walt Disney Publishing pop-up shop on the EXPO show floor.

With the purchase of “Frozen: The Songs” or “Frozen Picture Disc” at the Disney Music Emporium, guests will be issued a wristband to secure a space for an album signing with Kristen Anderson-Lopez, Robert Lopez and Tom MacDougall (co-producer, “Frozen” Soundtrack) on Saturday, Aug. 15 at 10:30 am.