In a week heralding major change at Disney, new studio chairman Rich Ross upended his management structure and aggressively set the frame for a new way of doing business at one of Hollywood’s most old-style studios.

Out: motion pictures group president Mark Zoradi, marketing chief Jim Gallagher and publicity planners Teri Meyer and Jasmine Madatian, among others. They come on the heels of the ouster of studio chairman Dick Cook, a three-decade veteran.

In: Home entertainment’s Bob Chapek becomes a czar overseeing distribution for every media platform — a position that did not exist before. Another new post — chief technology officer — goes to Greg Brandeau, formerly of Pixar.

Safe (for the moment): production chief Oren Aviv (pictured below at left, with Ross and Miley Cyrus) and operations chief Alan Bergman, who have increased responsibilities.

The big unknown is who will head marketing at the studio. That, too, will be a position with expanded responsibilities, running through the home entertainment division. That job, I’m told, has not been filled and Ross is still seeking the right candidate. 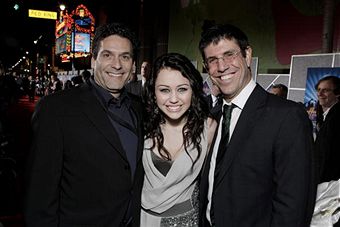 At a time of tectonic shifts in the entertainment industry, it looks as if Ross – a television veteran who has quickly won attention in-house as someone who asks the right questions, and asks them directly – has his finger on the rusting fulcrum at the studio.

Marketing wasn’t working, publicity wasn’t working – and all while a huge question mark hangs over the old-stye model of distribution for movies in general.

One sign of how seriously Ross takes the threat of changing business models is the decision to give Chapek responsibility for distribution and delivery for every form of release for motion picture and television content.

“A certain amount of change is inevitable as we move to adopt a new strategic approach to the way we make, market and deliver our films," said Ross, in the studio’s prepared statement. (He gave no live interviews, despite the numerous changes.)

But executives close to Ross explained the thinking as a break with the traditional way of looking at things.

“When you have these siloed distribution channels that aren’t working and developing strategically together, you’re probably leaving money on the table because you’re very insular,” said one Disney executive, who spoke on the condition of not being identified.

The example of a blockbuster movie like Disney’s latest “A Christmas Carol” is instructive. The overbudget 3D romp – at a cost upwards of $180 million (and probably more like $200 million) – took in a modest $30 million in its opening weekend.

Distribution and the unfolding of the release windows will be critical to finding all the revenue that can make a worthwhile investment of a project so pricey.

Then there’s marketing, a notable weak spot within the studio.

At an early meeting with his executives, Ross asked about the studio’s “Twitter strategy,” according to one person who was present. Someone mentioned there were about six people tasked with following Twitter. Ross thought that wasn’t nearly enough.

“It was pretty clear from the start that Rich wanted to make changes, and marketing has been a sore spot for a while,” said one executive, speaking on condition of anonymity. “It’s not surprising that it came to this.”

Oren Aviv will continue to oversee production, but now has physical production as an added responsibility.

Alan Bergman has had the Muppets studio and Disneynature added to his duties.

As for a cultural change at a studio where Dick Cook would pass through the hallways with a kind word and a pat on the back for the lowest employee to the highest in the Disney food chain – welcome to a new day.

Ross’s style seems to be no kid gloves. Security gathered in the front of the Roy Disney building on the Disney lot on Wednesday ahead of the firings.

And he informed the staff of the changes by an email via the same press release that had already been sent out to news outlets like TheWrap.

Further reading on the turnover at Disney:

Shakeup at Disney: Chapek Promoted, Aviv and Bergman Get New Duties, Gallagher Out

Disney fallout: Who messed up, Bob Iger or Dick Cook?

Battsek steps down as Miramax president