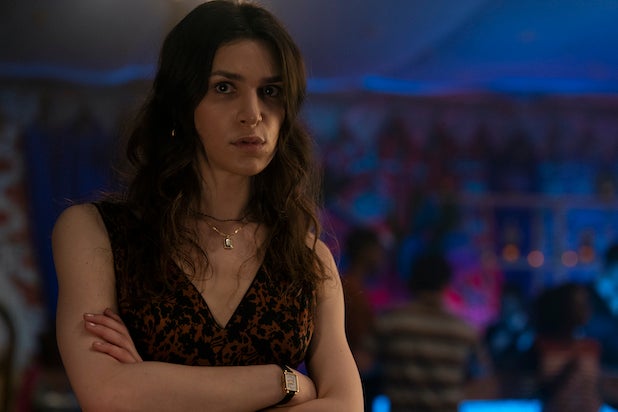 (Warning: This post contains spoilers for Monday’s episode of “Dispatches From Elsewhere.”)

The “game” that Peter (Jason Segel), Simone (Eve Lindley), Fredwynn (Andre Benjamin) and Janice (Sally Field) have been playing — along with everyone else roped into the Jejune Institute and the Elsewhere Society’s competing searches for the mysterious Clara — finally ended on Monday’s “Dispatches From Elsewhere,” with the reveal that it was, in fact, all a game. Except, it also wasn’t.

Though the middle of the episode, titled “Cave of Kelpius,” led our heroes to believe that this was all a large-scale puzzle orchestrated by someone, the end of the hour brought Janice face to face with that someone, a woman who tells Janice that Clara is a real person and that she, the architect of this game, is responsible for her death.

Now, Simone, Peter and Fredwynn don’t know this yet, but it’s just a matter of time before Janice shares this information with her friends. And over the course of the show’s final three episodes, Lindley tells TheWrap we’ll learn the “crazy” truth.

“Oh God, this story is so crazy,” the AMC drama’s star said. “Ah, it’s like, it’s all true. This is a game and also Clara is real. The way that Clara is real is probably different than most people are expecting her to be real. I don’t know. F–k, I don’t know what I can say!”

OK, back to what Lindley can talk about, which is what Simone experienced in tonight’s episode when she and her friends reached the end of the game — as far as she knows — and Peter didn’t take it so well.

“I think there’s two elements to Simone’s experience with the game,” she told us. “I think, initially, she really does think it’s a game. She thinks it’s fun, she thinks it’s not something she has to take completely seriously. But then when she meets Peter — something that I thought was an interesting challenge for me, because I’ve never really played somebody that is in the process of falling in love — so so much of the game for Simone happens through the context of Peter. So much of what she’s observing through this game, she watches Peter process it.”

“So there’s an element of her, I do think she thinks it’s fake, but because of what’s going on between her and Peter, she wants it to be real,” Lindley continued. “She wants Peter to be correct. And she wants it to be some deeper thing. And I think her kind of savvy, sarcastic, wise in the ways of the world brain is like, ‘No, this is a game’ and her more romantic, hopeful side is like, ‘Well, maybe Peter is right.’ So I think she echoes his upset and his pain at realizing this is all fake.”

That pain is what leads Peter to reject Simone at the game’s afterparty when she attempts to show him her true feelings by asking him to dance. Peter thinks she’s just taking pity on him, not realizing she has finally admitted to herself she wants to be with him romantically.

Luckily, this all gets reconciled when Peter realizes the mistake and hijacks fake Clara’s (Cecilia Balagot) performance of “On My Own” from “Les Miserables.”

“I find that sometimes when I can’t express myself, finding a song that seems to be expressing myself for me, it feels so good to do,” Lindley told us. “So I love that this song was just sort of being played and he seizes the opportunity and actually uses it to make a big gesture. It was really fun. I got to watch it so many times and it was just so sweet. It’s so ridiculous and I think Simone is just really shocked that she is the person who is eliciting this kind of emotion in another person. I think she doesn’t really think of herself that way, and to see someone fully loving her publicly, I think it’s a really big deal for her.”

Simone, a transgender woman, has been struggling with these feelings all season long, as she attempts to figure out what she wants out of life now that she’s completed her transition.

“Something Jason and I talked about a lot was this feeling in life that you make a big, big decision and then you get to the other side of it and you realize it didn’t change everything and you’re left with yourself,” the trans actress told TheWrap. “There’s that feeling of wherever you go, there you are. And I think that that is sort of the essence of Simone. She spent so much of her life wanting and needing this one thing and now that she has it, she’s sort of walking around on eggshells because she doesn’t really know what is left in the world to want.”

For now, it seems she knows she wants Peter, as the two finally kissed before the episode ended and appear to be on their way to a real relationship.

“Dispatches From Elsewhere” airs Mondays at 10/9c on AMC.