Blomkamp told the audience at the Arclight Sherman Oaks that the film grew out of a short he made, “Alive in Joburg,” which told a similar story to “District 9’s.” He did the short, he told TheWrap’s Sharon Waxman, because he always wanted to bring American- and British-style sci-fi to South Africa, where he grew up, and to add to his reel.

That reel made its way to Mary Parent, then at Universal putting together a film based on the video game Halo.

She mentioned the project to Peter Jackson, then working on his “King Kong” remake at the studio, and he was intrigued. He and Parent agreed that Jackson would mentor a young director on the shoot, and that’s how Blomkamp got involved. 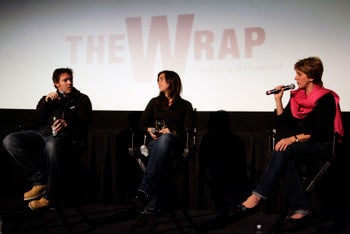 Although the Halo movie fell apart, Blomkamp and Jackson remained eager to work together. Jackson and partner Fran Walsh suggested working with Blomkamp on something independent, and “District 9” was born. (Jackson’s WETA Workshop handled special effects on “D9.”)

Asked how much Halo there is in “D9,” Blomkamp said, “Consciously, there’s not meant to be any.” However, he is an avid video game player, he said, and that did infiltrate the movie.

Blomkamp wrote the film with Tatchell. She explained how the partnership worked: “We started out very much working together, bouncing ideas back and forth.” (Blomkamp interjected, “She bossed me around.”)

“But once we started writing,” she continued, “we passed it back and forth – he worked on it for four days, then I did four days.”

She said they had different strengths and interests, which helped with the division of labor.

“The only area of contention was he wanted to kill off little CJ,” the “child” alien in the film, she said. “He actually wanted to write him out of the script because he cost more to render.”

Cope, who is credited in the movie as Grey Bradnam, UKNR chief correspondent, actually portrayed all of the movie’s alien “prawns.” He was later digitally erased by WETA after the aliens were computer-generated using his movements.

Cope explained the genesis of the aliens’ language came from a sound engineer at WETA in New Zealand. “He brought a pumpkin into work, rubbed it, it made this [screech] sound. They added clicking and ran it through a bunch of filters. They would take what the actors said and mix it up with the pumpkin noise.

“There’s also a lot of South African slang in there as well,” he added.

Blomkamp said of the aliens, “The film hinges on [the alien Christopher] and the kid. The biggest challenge for the visual effects artists and [star] Sharlto [Copley] was to bring that character to life. He had to feel sentient, real.”

As Cope put it, “We had to drag people kicking and screaming through the story. It forces the audience into a corner where Christopher is the only character you sympathize with.”

Made for about $30 million, “D9” was sold based on the script at AFM 2007 to Sony. At that point, based on what Blomkamp described as “almost a graphic novel with art from WETA,” Sony started working on the film’s unusual marketing campaign. Blomkamp credited Mark Weinstock’s team at the studio with zeroing in on the main theme of the movie right away: Segregation. “They zoomed in on what the film is about, in a very simple, aggressive way,” he said.

Blomkamp acknowledged that the ending of “D9” naturally sets up a potential sequel. Of course, he didn’t realize that right away. “Literally a week away from finishing the movie, while we were editing at WETA,” he said, “I went to Peter Jackson and said, ‘You know, we can do a sequel – the alien says he’s coming back in three years.’” However, he added, he didn’t want to do a sequel just because he could; it’s important “to keep doing sci-fi in South Africa.”

And before that film could get under way, Blomkamp said, he’s writing his second film, which he described as “another wacky sci-fi picture” that he plans to shoot in the second half of 2010, possibly followed by the “D9” sequel.