“The Divergent Series: Allegiant,” the third film in Lionsgate’s once-hot “Divergent” franchise, is tracking for a $30 million to $40 million weekend, significantly less than its predecessors — which both opened in the mid-$50 million range.

It’s the latest sign that dystopian young-adult movies, once a hot commodity with audiences and studios alike in the aftermath of the first “Hunger Games” movies, face a future as bleak as their onscreen landscapes.

Recent attempts to launch new YA franchises like “The Giver” and “The 5th Wave” have sputtered at the box office, and interest in existing series like “The Maze Runner” and “Divergent” seems to have tapered off. And studios and producers who rushed to grab rights to just about any book on a YA best-seller list have been slow to greenlight any new ones.

“The YA sub-genre definitely seems to be moving past its prime at the box office,” BoxOffice.com senior analyst Shawn Robbins told TheWrap. “That’s not to say there won’t still be successful or profitable movies of a similar ilk, and there are still plenty of loyal fans out there, but studios should be paying attention to the law of diminishing returns that’s setting in.”

It wasn’t so long ago that YA adaptations were the hottest thing in Hollywood. With the tremendous success of the “Twilight” series, which began in 2008 and cumulatively grossed $1.3 billion domestically, studios rushed into making more.

When “The Hunger Games” threw Jennifer Lawrence into movie stardom, studios perhaps thought riding the train of the YA popularity might be a safe bet. But recent box office returns prove otherwise.

Last fall’s final “Hunger Games” movie was the weakest box office of the four-film series. And Fox’s “Maze Runner: Scorch Trials” similarly topped out at $81.7 million, significantly under the $102.4 million gross of the 2014 original film despite a budget that was almost twice as big. Other recent attempts at launching franchises have similarly sputtered.

In January, Chloe Grace Moretz‘s “The 5th Wave” opened with just $10.3 million and topped out at $34 million, scuttling hopes for a lucrative film franchise based on Rick Yancey‘s best-selling trilogy.

Even movies that performed slightly better at the domestic box office, like 2011’s “I Am Number Four,” ($55.1 million) and “Ender’s Game” ($61.7 million), failed to perform well enough to justify big-screen sequels.

It’s no wonder that a slew of hit YA book properties that studios snapped up at the height of the boom remain stalled in development, without a greenlight on the horizon. These include Lionsgate’s “Chaos Walking,” Fox’s “The Young Elites,” New Line’s “Raven Boys,” CBS Films’ “Legend” and Palomar Pictures’ “The Immortal Rules.” 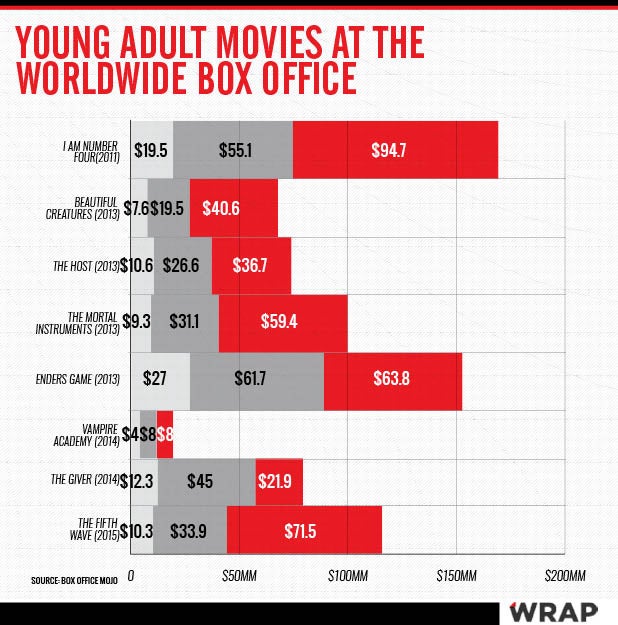 Industry insiders point to several factors in the weaker performance of YA movies, from the interchangeability of the stories to overall audience fatigue with the genre.

Many think that “The Hunger Games” set too high a bar for dystopian imitators to follow. “‘Hunger Games’ made such an indelible impression that it became such a gold standard for YA movies,” comScore senior analyst Paul Dergarabedian told TheWrap. “All the copycats came along, and they were hoping they could ride that wave of popularity.”

Others point to the fickleness of the target audience. “The YA audience is very difficult to pin down and very difficult to figure out,” said Dergarabedian. “They might think that something is cool one day, but the next day, it’s no longer cool.”

Plus, the teenage audience is quick to age out — both growing out of things they liked as teens and replaced by younger audiences with interests all their own. The initial teen fan base loyal to the “Twilight” series are into their 20s now, and today’s teens were in elementary school when the Bella-Edward love story hit the screen.

“The ‘Twilight’ films set the stage for billions of dollars at the worldwide box office because they were perfectly targeted to the audience and they were fresh and new, and for the younger audiences, they thought, ‘Wow, they are building this franchise for me,'” Dergarabedian said. “But as all teenagers do, they moved on.”

Additionally, Dergarabedian believes that although YA movies will continue to be made, Hollywood is suffering from a dystopia burnout at the moment.

“The YA genre is not over,” he said. “The dystopian genre? That’s kind of tough because there have been so many… That audience is saying, ‘What else have you got for us?'”

Quvenzhané Wallis and Jacob Tremblay may be too young to drive, but they’re among the best and brightest of young Hollywood