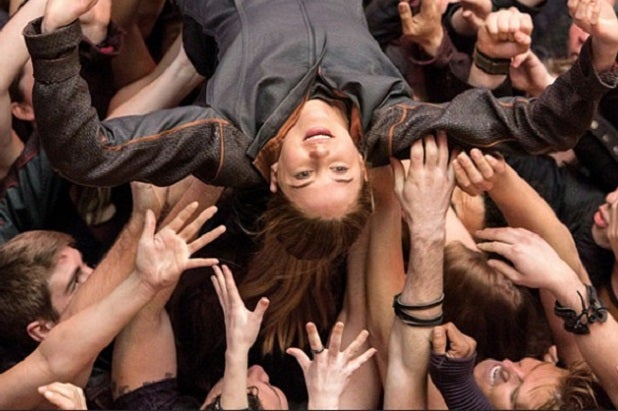 Things are coming together nicely for “Divergent.”

Early tracking came online Thursday for the young adult sci-fi adventure that Lionsgate and Summit Entertainment are banking on becoming a franchise, and it looks on course to open with north of $50 million.

That’s a strong number, particularly since the sci-fi adventure, based on Veronica Roth‘s bestselling novels and starring Shailene Woodley and Theo James, won’t open until March 21. It has time to build.

And it’s solid enough to withstand comparisons with “Twilight” and “The Hunger Games,” two other book-based young adult films that turned into lucrative franchises. The studio has already scheduled sequels in March of 2015 and 2016 for “Divergent.”

The anticipation over “Divergent,” directed by Neil Burger, has been heightened by the success of those films and the failure of a string of recent book-based, teen-targeting movies like “The Host” and “Mortal Instruments: City of Bones,” which their studios had hoped would launch franchises.

Lionsgate and Summit executives weren’t talking Thursday, but they have to be happy with what looks like a strong start for “Divergent.” The tracking numbers compare with the first “Twilight” movie at a similar stage, and they are also in line with the long-range projection of BoxOffice.com as well.

The first “Twilight” movie opened to $69 million in November 2008. It eventually took in $192 million and spawned four sequels. Overall, the franchise brought in $3.3 billion globally.

In March 2012, the first “Hunger Games” opened to $152 million, and its “Catching Fire” sequel debuted to $158 million last year. Together, they’ve taken in $1.5 billion worldwide — with two more installments coming at Thanksgiving over the next two years.

“Divergent” is unlikely to hit those heights, but a $50 million opening would put it comfortably over $100 million domestically and on a path to profitability. It has an $85 million production budget and marketing will likely run another $40 million, but pre-sales of foreign rights have already brought in roughly $65 million.