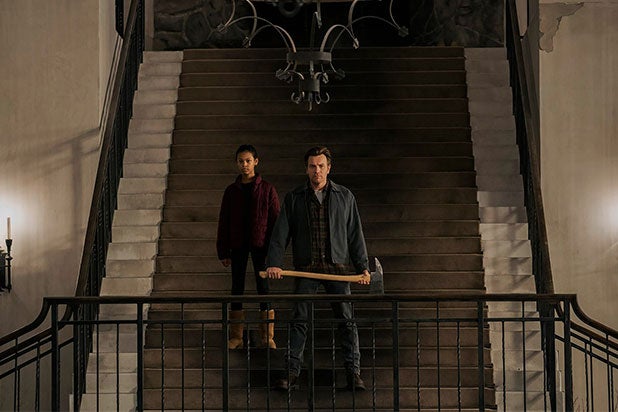 (Major spoiler alert: This article delves into heavy spoilers for “Doctor Sleep.” If you haven’t seen the movie, do not read on.)

“Dare to Go Back” is the slogan on the poster for director Mike Flanagan’s “Doctor Sleep,” a sequel to Stanley Kubrick’s 1980 film “The Shining.” Of course, no “Shining” sequel could be complete without the Overlook Hotel — which created a difficult but fun challenge for Flanagan.

Flanagan told TheWrap that the crew rebuilt the hotel that Kubrick had made famous in 1980 using old stage sets and blueprints, which were made available to them by the Kubrick Estate and Warner Bros.

“The weird thing is, I think for people who grew up loving ‘The Shining,’ the Overlook exists in our imagination almost in its completion,” Flanagan told TheWrap. “You walk in and it’s like you’re walking into your memory of the first time you saw this film, and everyone grinned. Everyone got giddy.”

Rebecca Ferguson, who plays Rose the Hat in the film, said the Overlook Hotel “changes the impression of whoever’s in there.”

“That was the coolest treat I think we had, like for all the heavy stuff and kind of wrestling with these huge themes that we’re going through for most of the story, I think the reward that all of us have is we got to walk through the Overlook Hotel,” Flanagan added. “We got to ride on a grown-up big wheel.”

But recreating every nook and cranny of the Overlook Hotel wasn’t the most difficult part for Flanagan and his crew. Bringing back Jack Torrance proved to be immensely hard, because they needed him to be the same age now as he was during the events of “The Shining.” Jack Nicholson, who played the famous character in the 1980 film, is now 82 years old.

“That was a huge deal,” Flanagan said. “Well, Stanley Kubrick showed us how to do that. Actually, he showed us how to do that in the way he handled Delbert Grady in ‘The Shining.’ Because when Jack Torrance talks to Grady in the bathroom, Delbert Grady denies who he is. And he says, ‘No, you’ve mistaken me for someone else, I’m just a waiter,’ And Jack has to say ‘No, you’re the caretaker. You killed your family.’ He says, ‘No, you’re mistaking me for someone else.’ That was the best way to handle Jack. Otherwise, you’ve got somebody inevitably doing an impression or a parody of Jack Nicholson and that was something no one could ever do.”

He added, “so once I looked at that, it was like, that’s the only way through it. And because we’d had Dick Hallorann, and Wendy Torrance and little Danny, we’d used actors who reminded us enough of those characters but who were still doing their own performance instead of doing an imitation. That was the only way to approach Jack. Otherwise, we’d have to do something digital. And while that technology is always improving, it still rips me out. I still scrutinize the technology when I see it, instead of paying attention to the story, and that’s just me.”

“I was worried,” Ferguson said, to which Flanagan replied, “Oh, everybody was worried! It’s one of my favorite scenes of the film.”

Ewan McGregor, who plays the adult version of Danny Torrance, thought the way Flanagan handled the ending of the film was a way for fans to come to terms with the discrepancy between King’s “The Shining” book and Kubrick’s “The Shining” movie. King has been a vocal critic of Kubrick’s adaptation, saying Kubrick had “no sense of emotional investment in the family whatsoever.” King also has said he “hated” the adaptation.

“I think I’ve gotten someone described it as this, and I’ve really stolen it and I want to use it forever, but someone said it’s less a sequel to ‘The Shining’ as it is a descendant in that it has two parents and it has their DNA, and it’s just part of its identity,” Flanagan concluded. “It’s got King and Kubrick, but it still has to find its own way.”