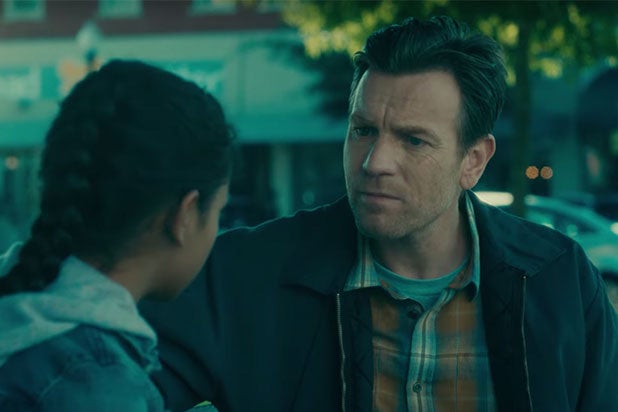 “Doctor Sleep,” the horror sequel to “The Shining” from Warner Bros. starring Ewan McGregor, made $1.5 million at the box office in Thursday night previews.

It’s another busy weekend at the box office, with four movies opening in wide release. Warner Bros. “Doctor Sleep” is projected to be the top opener however when it opens against Paramount’s family film “Playing With Fire,” Lionsgate’s World War II epic “Midway” and Universal’s holiday themed rom-com “Last Christmas.”

“Doctor Sleep” is projected to earn $35 million, but there’s a chance with the increased enthusiasm for adaptations of Stephen King’s stories, namely “It Chapter Two” from earlier this year, that the film could over perform. For a comparison, Paramount released the adaptation of King’s “Pet Sematary” this April. It made $2.3 million on Thursday night before opening to $24.5 million on a $21 million budget.

Ewan McGregor stars in “Doctor Sleep” as a grown up Danny Torrance, still tormented 40 years after he first stayed at the Overlook Hotel. When he meets a young girl with enormous “shine” powers similar to his own, he must work to protect her from a cult looking to harness her power and attain immortality. Mike Flanagan wrote and directed the film based on King’s 2013 novel of the same name. Rebecca Ferguson and Kyliegh Curran co-star.

Universal’s “Last Christmas” starring Emilia Clarke and Henry Golding made $575,000 at the Thursday box office from 2,700 screens. It opens on 3,448 screens this weekend.

Paul Feig directs the romantic comedy with a sense of holiday cheer that stars Clarke as a frazzled, down on her luck woman working odd jobs as Santa’s elf, only to meet a man played by Henry Golding who appears too good to be true. It’s projected to open in the mid-teens on a budget of roughly $30 million.

In 2016, Universal released another Christmas-themed comedy, “Almost Christmas.” It made $507,000 from its Thursday night previews at 1,885 theaters and went on to gross $15.6 million for the weekend.

“Midway,” from director Roland Emmerich and released by Lionsgate, made $925,000 at the Thursday box office from 2,600 locations, and it will open on 3,242 screens this weekend.

Emmerich’s action and visual effects heavy story is about the Battle of Midway during World War II following the attack on Pearl Harbor. Lionsgate is predicting an opening between $12-14 million for the film ahead of Veterans Day, but that comes against a reported $100 million budget. The project is largely a gamble on Emmerich’s part, who raised much of the budget independently, including $24 million from Chinese financiers, ahead of Lionsgate acquiring the US and UK distribution rights.

“Playing With Fire,” Paramount’s family comedy starring John Cena, had preview screenings beginning at 4 p.m. Thursday and earned $450,000 from approximately 2,500 screens. It will open on roughly 3,000 screens this weekend.

Paramount is projecting an opening between $7-10 million for the film, which stars the wrestler-turned-actor Cena in a comedy about an elite firefighter forced to care for a family of three kids after rescuing them from a blaze.