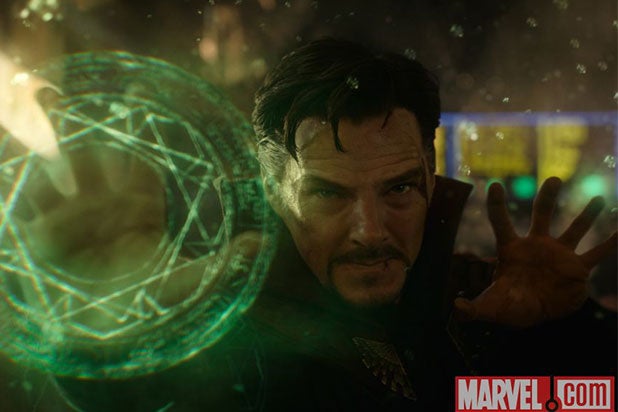 The prognosis is excellent for Disney’s “Doctor Strange,” after the Marvel Cinematic Universe film took in a healthy $9.4 million in Thursday previews.

Benedict Cumberbatch plays the title physician in the film, Marvel’s first since May’s “Captain America: Civil War,” which went on to a $179 million opening weekend and $1.1 billion worldwide.

“Doctor Strange” isn’t expected to reach those heights — after all, its titular character isn’t as well known as Captain America — but it could open to as much as $73 million, although Disney is forecasting a more conservative $65 million debut. The movie, which will open on 3,882 screens, has already made $133 million overseas. And critics love it, giving “Doctor Strange” a 90 percent rating on Rotten Tomatoes.

Cumberbatch’s Dr. Stephen Strange is a gifted — and aware of it — neurosurgeon who crashes his sports car and loses the use of his hands. Desperate to have his defining identity back, he eventually ends up in Nepal, where he trains under a sorcerer and experiences a mystical world with multiple dimensions.

The movie’s expected strong performance should only add to Disney’s banner 2016, as the studio has already set a record for worldwide box office receipts in a single year.

The movie, based on the colorfully-coiffed toys and starring a voice cast including Justin Timberlake, Gwen Stefani, Anna Kendrick and Zooey Deschanel, is expected to open to $47 million, although Fox is prognosticating something in the high-$30 million range across 4,060 screens.

The animated flick follows an overly happy Troll named Poppy (Kendrick), who teams up with curmudgeonly Branch (Timberlake) to save her friends. “Trolls” should be a hit with family audiences — and won over critics as well, with a 76 percent Rotten Tomatoes rating.

The Cross Creek/Lionsgate World War II drama starring Andrew Garfield as a conscientious objector is getting some awards buzz and has a sterling 87 percent rating on Rotten Tomatoes. Going opposite “Doctor Strange” and “Trolls” will keep it in third place, although the film is projected to make a solid $16 million during its opening weekend. It expands to 2,886 theaters Friday.