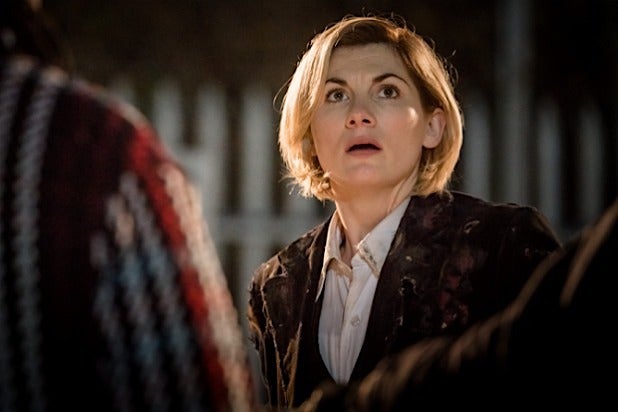 “Doctor Who” fans seem to be united in their opinion of the first female Doctor on the longstanding sci-fi series: Jodie Whittaker is “killing it.”

The BBC series launched its Season 13 Sunday, and although some saw the Doctor’s change of gender “a loss of a role model for boys,” the reaction to Whittaker’s performance appears to be overwhelmingly positive.

“I have watched every #DoctorWho actor since the first back in 1963. Jodie is quite outstanding & up there with the best. Brings great vibrancy, energy & no little touch of humour to the role. Jodie is Dr. Who,” one Twitter user wrote.

“And Jodie is, in just one episode, 100% The Doctor. No question,” wrote another “Doctor Who” fan.

Here are a few others who gave Whittaker a Standing O:

I have watched every #DoctorWho actor since the first back in 1963. Jodie is quite outstanding & up there with the best. Brings great vibrancy, energy & no little touch of humour to the role. Jodie is Dr. Who.

The Doctor who makes her own Sonic Screwdriver. #DOCTORWHO pic.twitter.com/41uwER6PeV

And Jodie is, in just one episode, 100% The Doctor. No question. #DoctorWho pic.twitter.com/otZ6n6dUpA

The 13th doctor is a wonderful brew of witty, funny, smartass, and bad ass! #DoctorWho

Have to say so far that Jodie Whittaker is killing it as the Doctor. #DoctorWho This is the quickest I've gotten used to a new Doctor

30 seconds after Jodie is introduced as The Doctor… #DoctorWho pic.twitter.com/WGbWv4Lyhb

She’s got 11’s energy, with 12’s emotional depth, a smattering of 9’s sarcastic wit, and a touch of 10’s mental exuberance. It’s working for me. #DoctorWho

“I’ve got this!” I adore her #doctorwho pic.twitter.com/HliJv9JEsx

New tone – keeps the humour, but feels darker than Capaldi

YALL!! I LOVE THE NEW DOCTOR!!! SHE IS AMAZING #DoctorWho

Also Read: 'Doctor Who' Star Jodie Whittaker Tells Us Why the Doctor's Gender Is 'Irrelevant'

“Essentially, it’s not a gender — the Doctor is a Time Lord, an alien with two hearts,” Whittaker told TheWrap in September. “For me, to play this role like somebody else has played it would defeat the object of being cast. It didn’t require me to physically take on someone else’s performance because the traits of the Doctor that carry the Doctor throughout the 55 year history of the show are in the writing, and as long as I was being truthful to the writing, then I was honoring those traits.”