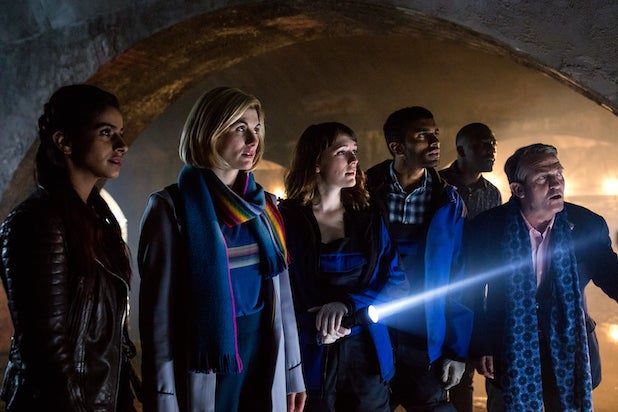 BBC America had a somewhat-less-than-happy New Year when the ratings for the “Doctor Who” holiday special — which aired on New Year’s Day vs. the annual installment’s traditional Christmas Day slot — fell 29 percent in the key adults 18-49 demographic against Season 10’s comparable standalone episode.

Meanwhile, “Twice Upon a Time,” the previous “Doctor Who” holiday special — which aired on Christmas Day 2017 and featured 12th Doctor Peter Capaldi’s exit and Whittaker regenerating into the new Time Lord at the very end of the episode — landed an average of 1.7 million total viewers, 778,000 in the key demo and 864,000 among adults 25-54, when counting three days’ worth of delayed viewing.

Also Read: 'Doctor Who' New Year's Day Special: Looks Like Jodie Whittaker Is About to Meet the Daleks (Video)

However, “Resolution” is basically flat with Season 11 as a whole, which averaged 1.4 million total viewers, 603,000 in adults 18-49 and 670,000 among the 25-54 demo, in Live+3 numbers. And Whittaker’s special was up 19 percent in total viewers and 23 percent in the key 18-49 demo compared to the show’s season finale in December. It was also the No. 1 most social program on New Year’s Day (excluding sports), according to Nielsen Social.

Whittaker’s entrance has revitalized “Doctor Who” as a whole with a surge in ratings for Season 11. The show’s most recent run, which wrapped Dec. 9, averaged 1.6 million viewers per episode — up 20 percent from the 1.3 million Season 10 brought in during Capaldi’s final year  — when counting a week’s worth of delayed viewing data from Nielsen.

In November, BBC America announced it was shifting the sci-fi series’ highly-anticipated annual, festive installment from its traditional Dec. 25 slot to Jan. 1, and leaning into the whole “Who Year’s Day” angle with this logline: As the New Year begins, a terrifying evil is stirring from across the centuries of Earth’s history. Will the Doctor, Ryan (Tosin Cole), Graham (Bradley Walsh) and Yaz (Mandip Gill) be able to overcome this threat to Planet Earth?

Production will begin on Season 12 of “Doctor Who” in spring 2019. However, the series won’t be ready to broadcast until early 2020 because, according to the BBC, the next batch of episodes will require “uniquely complex filming requirements and a lengthy post-production period.”