So, the Doctor's Freudian Id is really a snarky little man who hates himself and has a penchant for redheads?

Dream stories can be an obscure and strange muddle (“Jacob's Ladder” anyone) dealing as they do with the human psyche, and this one is no different. At first, I was thinking the Dream Lord (Toby Jones at his sarcastic best) was similar to, or an aspect of the Trickster as seen lately in the “Sarah Jane Adventures,” so I was actually a little surprised at the very low-key reveal of the psychic pollen at the end of the episode. 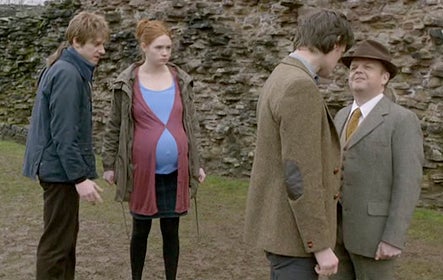 In thinking about it though, it does make perfect sense. We've known for some time that the Doctor carries a lot of self-loathing for what happened during the Time War and the events that led to the destruction of Gallifrey. It's a heavy burden to bear. It also forces us to ponder some interesting and uncomfortable questions about the Doctor and his relationship with Amy, the addition of her fiancé Rory (who dies in the “dream”) and the representation of Amy being pregnant. Oh my, what would Freud say!

When I first viewed this episode I was on the proverbial fence in thinking about whether I liked it. After a repeat viewing, I found the story much improved even though the element of mystery about the Dream Lord was removed. “Doctor Who” is at its best when it forces you to think just a little bit harder, and this dreamy episode hits the mark on many levels, delivering highs of insightful interpersonal relationships as well as the lows of a tawdry quirk shop.

Best Quotes:
Doctor: “No, No, No … Ice can burn—Sofas can read—It's a big Universe.”
Amy: “If we're gonna die, let's die looking like a Peruvian folk band”

Worst Parts:
I think what surprises me most, is that the Doctor's brain and psyche would be so similar to a human's or why he would be so affected by the psychic pollen which caused him to fall asleep and dream.
The fact that yes, the Doctor really hates himself that much.