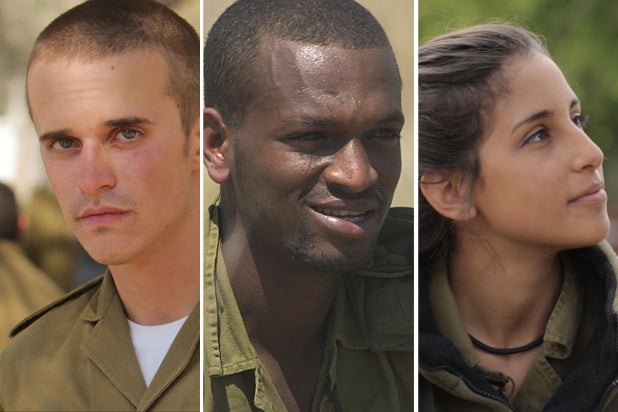 From backstage, Rabbi David Baron surveys the almost full house at The Saban Theatre on Wilshire Boulevard in Beverly Hills. When it’s not the venue for national touring acts like Al Dimiola or A-list comedians like Jerry Seinfeld, the Saban is home to Baron’s flock.

Known as “Hollywood’s Rabbi,” Rabbi Baron’s Temple of the Arts caters to the spiritual needs of many in the motion picture and television industry. The Temple’s database rivals Amy Pascal‘s e-mail list, without the vitriolic messages of overnights stats or jibes at Hollywood’s A-listers. Many of them have sat in this very audience to soak up a signature sermon by Rabbi Baron. Tonight however, as the good Rabbi goes over his notes before delivering his introduction, a motion picture of a different cut will be screened, while the Temple and its partners take a stand that is anything but popular in Hollywood.

“Beneath the Helmet” seems more buddy movie than documentary. Reminiscent of “The Breakfast Club,” “Beneath the Helmet” is actually a coming-of-age film about five children who are one day surfing on the beach with friends, and the next day soldiers in the most vilified and lethal army in the world, the IDF (Israeli Defense Force).

Where “Beneath The Helmet” parts from other coming-of-age films is that these former teenagers exist in a temporal element that is the result of a cultural war that has been waged for eons. The issues that drove David to slay Goliath still linger. This time, Uzis have been traded for slingshots, and the weight of world opinion delivered in skewed Facebook memes and BDS (Boycott, Divest, Sanction is a movement aimed at forcing college campuses to cut all ties to Israel) lies have put these young freedom fighters in the cross hairs of a planet gone mad.

“Beneath the Helmet” is the truth in a cesspool of media bias. The soldiers are shown as anything but harbingers of an apartheid-tainted regime. They are as diverse as Israel itself is. One young Ethiopian is shown moved to tears as his commanding officer tells him that his expenses are being covered by an Israeli benefactor. In a land where Muslims and Arabs gel and co-exist in a society that is truly an oasis in a desert of hate, “Beneath the Helmet.”

IDF Major Ortal Halff, a former Nachshol company commander (a unique company that only includes female combat soldiers that gather intelligence) was seated in the audience. Her organization, “Thank Israeli Soldiers” was among the list of non-profits and foundations that co-sponsored the screening. Looking more like a ballerina than a platoon commander, Major Halff’s resume includes more than 13 years of service as an intelligence ops specialist.

Also Read: Woody Allen at Cannes: Life Has No Meaning, and His Amazon Series Could Be a 'Cosmic Embarrassment'

“The IDF brings together all kinds of soldiers with different backgrounds,” commented Major Halff, “the movie ‘Beneath the Helmet’ is a very accurate reflection of soldiers in the IDF — secular and religious, black and white, an incredible diversity of people.”

As the lights in the art deco dim, Rabbi Baron takes to the stage, bathed in a keylight that the night before followed a global pop sensation.

“In an era of boycotting Israeli products and even Israeli academics on campuses and across Europe, the true story is rarely told,” extols Rabbi Baron. “Israel’s soldiers are depicted as monsters in the Palestinian press as it lauds its terrorists and suicide bombers.”

Baron pauses, and continues as he introduces the film: “Beneath the Helmet shows us the human side of those young men and women who serve to protect Israel, an embattled island of Western enlightenment and democracy in a part of the world where beheadings, honor killings of women and executions of gays are all too .”

When it comes to serving, there is no choice in Israel. Unless you are in some fringe orthodox sect that cowers rather than fights and uses the Israeli constitution as more of a nursing blanket than a shield, you have no choice. You’re in. The difference between the basic training of the five soldiers profiled in “Beneath the Helmet” and a group of freshly scrubbed recruits who fall into line at Camp Pendleton is obvious. The Israelis eat, sleep, bathe and train on the battleground.

I had to remind myself that these Westernized kids are half a world away from where I sit in relative security, drinking coffee and looking out on my quiet suburban street. We are isolated, inured, insulated against war. In the United States, it comes to us in shaky hand-held videos or blogs written by amateurs whose fragmented logic is the effluence of the sewer that their hate bubbles up from — we discuss and argue while waiting for the Pop-Tarts to spring from the toaster. We debate and haggle in between short spurts of TMZ sound bites.

Not so in Israel, where war can break out at a moment’s notice — not an ocean away, but steps away.

“Beneath the Helmet” as a documentary fulfills the goals that all documentaries ascribe to. However, the real gift of this movie is that it shows the greatest asset of any nation, their children, have the most to give, and the most to lose.