Deciding on an outfit to wear to meet the President of the United States is surely a daunting task, unless you’re Joe Kelly. The Dodgers pitcher used the team’s White House visit as an opportunity to show off his new threads, which were courtesy of one lucky fan.

The 2020 World Series champs paid their customary White House visit on Friday, where Kelly stood out among a sea of sharp but standard ensembles. That’s because he was rocking a traditional mariachi band jacket with silver hardware to match his championship ring.

Here he is with teammate Justin Turner. 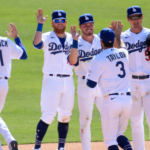 Kelly was gifted the jacket during warm-ups before facing off against the San Francisco Giants on Wednesday. The band Mariachi Garibaldi was on-hand to serenade the home team. As seen in the clip below, it was then that Kelly approached trumpet player Grover Rodrigo to propose a trade. Later, the two met up again, with Kelly exchanging one of his official jerseys for Rodrigo’s jacket.

“Really glad he kept his word,” he told NBC Los Angeles, “A little bit of me had a little bit of doubt, but I’m so glad it happened. I hope he treasures his jacket as much as I treasure his jersey.”

Although there’s no word on what President Biden thought of Kelly’s fashion choice, we can venture a guess that Rodrigo approves. 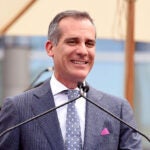