Marlon Wayans‘ spoof film “Fifty Shades of Black” opened domestically on Friday and is looking to make an estimated $6 million this weekend — far short of its parodic predecessors.

Has the parody’s popularity passed? Some box office experts think so.

“Pure parodies are not popular anymore, primarily because they aren’t as timely in today’s society,” BoxOffice.com senior analyst Shawn Robbins told TheWrap. “Audiences are consuming content on a daily basis which lampoons pop culture and real world news as it’s happening. In the social media age, most straight-up parody films cannot capture that zeitgeist anymore without having something else to offer.”

“Austin Powers in Goldmember” commanded $73 million on its opening weekend when it opened in 2002, and went on to make over $213 million domestically. The first four “Scary Movie” films came in at the $40 million range; the fifth film in the franchise, released in 2013, could only bring in $14.2 million. That same year, “A Haunted House” made $18.1 million. Its sequel earned just $8.8 million in 2014. Almost two years later, “Fifty Shades of Black” made even less.

Of course, it may not be that the parody genre is the problem — it may just be that today’s parodies aren’t as good, said Exhibitor Relations senior analyst Jeff Bock.

“The fact is that Fox and other studios were putting out ‘Epic Movie’ and such, and the quality wasn’t there and that’s a problem,” said Bock. “If they were funny like the ‘Airplane!’ films or ‘The Naked Gun,’ who consistently make quality spoofs, the audience trusts them. That wasn’t the case with ‘Epic Movie’ and ‘Scary Movie.'”

Robbins believes that the decline in demand for parodies is largely due to how popular humor has evolved.

“The basic idea of parody still has commercial potential, but smart, satirical humor trumps it right now,” he said. “The Mel Brooks and David Zucker libraries of films, plus ‘Austin Powers,’ are harder to imitate now because they were trailblazers with edgier humor than moviegoers were used to at the time. Some of the closest examples we have to that now are the ‘Jump Street’ films, ‘LEGO Movie’ and (presumably) ‘Deadpool.’ All of them contain a through line of parody, but they still rely on sharp writing, high production values, and blurred genre lines that masters like Brooks, Zucker, Mike Myers and others championed.”

“Fifty Shades of Black” started off the weekend with $2.2 million at the Friday box office. It currently holds a 14 percent Rotten Tomatoes score.

There are other circumstances — separate from quality — that help explain the bleak forecast for “Fifty Shades of Black.” For one thing, it’s R-rated, which Bock says “takes out a big chunk of audiences — PG-13 is usually the way to go with spoofs.”

“Hot Shots!” boasted Charlie Sheen and a group of recognizable comedy actors who provided stability — modern parodies like “Fifty Shades” do not.

“You have to put money and talent into it; you can’t just throw it out there,” Bock added. “They’ve burned their own bridges by making so many crappy movies in that genre. There is just no shelf life to these movies,” unlike famous farces by Mel Brooks, for instance. “You can always go back to them,” he said.

Brooks directed, wrote and starred in “Spaceballs,” a “Star Wars” send-up that was one of his most successful films.

Bock and Robbins agree that there will always be a place for parodies, even though their popularity might be diminishing. The woeful box office returns and straight-to-video deployments of these films indicate that theaters may no longer be the best platform for debuting them.

“Look at ‘Ridiculous 6'; it went straight to Netflix,” said Bock. “There is an avenue for these films, but I don’t think theaters are the right place, until you get an A-list cast.”

This chart shows the weekend grosses for parody films since 2000: 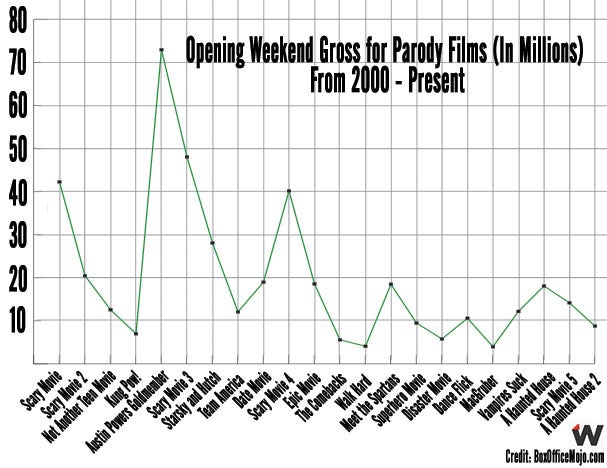