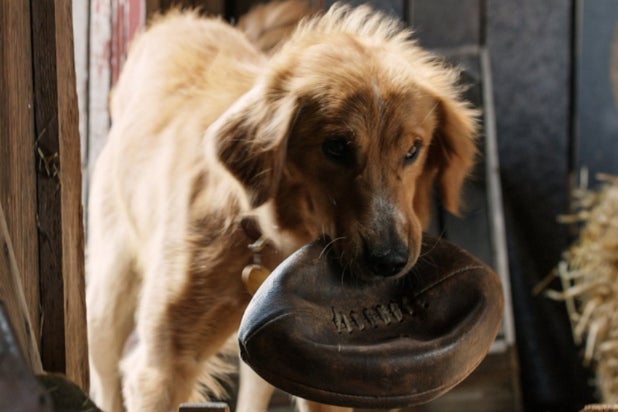 How Universal’s “A Dog’s Purpose” will do at the box office this weekend is something of a mystery as trackers are unsure how a recent leaked video will impact the movie’s opening weekend.

Analysts are putting the film in an opening range of $13 million to $21 million, with the studio looking at a gross in the high-teens to $20 million. A gross around $18 million seems likely, according to Jeff Bock, senior analyst at Exhibitor Relations.

Universal canceled the premiere and the film’s press junket, and the studio, production company Amblin Entertainment and the film’s producers have refuted claims that the dog was abused or injured during the making of the film.

The film was produced for an amount in the low-$20 million range and stars Britt Robertson, KJ Apa, John Ortiz, Juliet Rylance, Pooch Hall, Dennis Quaid and Josh Gad. It was directed by Lasse Hallstrom and produced by Gavin Polone, who also said that the video did not accurately portray what happened on the set.

“A Dog’s Purpose” is based on W. Bruce Cameron’s 2010 novel about a dog that learns his purpose as he is reincarnated into various dogs over the course of several lifetimes.

Although trackers are not sure about the exact earning potential for the film its opening weekend, a battle is brewing for No. 1 between the dog-themed film, James McAvoy’s “Split” and Screen Gems’ “Resident Evil: “The Final Chapter.”

Last weekend, “Split” exceeded all expectations and opened to $40 million although tracking initially had it at $20 million. The film is expected to have a strong hold, and even if it experiences a 50 percent drop-off, it will compete against “A Dog’s Purpose” and “Resident Evil.” If the controversy puts a big dent in “A Dog’s Purpose”‘s performance, “Split” will take first place with $20 million to $25 million.

“Resident Evil” is opening in 3,100 locations on Friday and has already grossed $35 million in Japan — the studio is anticipating $70 million internationally by Monday. The film’s budget was an estimated $40 million and the studio expects a gross in the low-teens for the weekend domestically. Trackers are seeing a range from $13.5 million to $18 million.

Paul W.S. Anderson wrote, directed and produced the latest film in the franchise, picking up immediately where “Retribution” left off. Milla Jovovich’s Alice is the only survivor in humanity’s fight against the dead. The film also stars Ali Larter, Shawn Roberts, Iain Glen, Ruby Rose, Eoin Macken and Fraser James.

The franchise, which is one of the most popular and successful video game-based movie series ever, is approaching $1 billion at the worldwide box office — 80 percent of the movie grosses are from international territories.

The Weinstein Company’s “Gold,” starring Matthew McConaughey is looking at an opening between $2 million and $5 million, although the studio anticipates an opening in the $4 million to $5 million range.

Inspired by a true story, McConaughey stars as Kenny Wells, a modern day prospector desperate for a lucky break, who teams up with a similarly eager geologist (Edgar Ramírez) and sets off into the Indonesian jungle looking to make it rich. They quickly learn, however, that finding gold is much easier than keeping it.