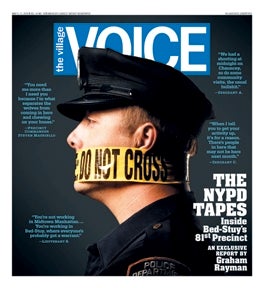 An off-color joke about Cablevision chief James Dolan in a March blog post by a former Gawker blogger on the Village Voice Web site wound up costing the alt-weekly more than a million dollars in advertising – but, as of right now, no one – not the blogger, editor or publisher — has lost their job over it.

“I’m still alive,” the blogger, Foster Kamer, wrote in an e-mail to TheWrap. “I’m still here. I still have a job. And I’m still going to write about Jimmy ‘Straight Shot’ Dolan. People who’re surprised that I haven’t been canned clearly aren’t familiar with The Village Voice.”

"I don’t know Dolan well enough to understand why he’s so sensitive about his penis," the editor, Tony Ortega, wrote in a separate e-mail.

(For the record, Kamer’s joke involved a suggestion that Dolan, whose Rainbow Media recently purchased the Gothamist blog, would soon have his d*** in the mouth of its editor.)

It’s an inside baseball, New York media story, perfect for the Observer. But it’s also a million dollars, and has thusly gotten a lot of attention beyond the city limits.

Cablevision did not immediately respond to requests for comment. (But a Cablevision spokesman did tell the New York Post: "They are free to write whatever they want, but who the hell wouldn’t pull their advertising after they read that?")

According to the Voice, the blog post with “a mediocre dick joke” led Dolan to pull a $20,000 IFC Center and all of Madison Square Garden Entertainment’s advertising from the paper (LiveNation – a partner of MSG – did, too, “at the behest of Dolan”).

At the moment, the Voice is wearing its Scarlet D as point of pride. Both Kamer and Ortega pointed to a cover story “NYPD Forced to Apologize Publicly to Rape Victim for Downgrading Her Attack” as proof they won’t back down from authority. (Of course, the NYPD isn’t spending millions on advertising in the Village Voice as Dolan and his interests apparently were.)

“The column was named Runnin’ Scared for a reason,” Kamer wrote in his e-mail. “One that had to do less with us, and more about those (especially those in power) finding themselves on the other end of our ink.”

On his Tumblr, however, Kamer was a bit more apologetic, at least to the Voice ad sales department:

"No way will I ever — or at least from where I sit, in the foreseeable future — be able to justify that kind of fiscal cost to the Village Voice, unless some kind of endowment or advertiser steps in to replace them anytime soon. I’m sure, because we have a hardworking sales staff, it’ll happen over time. But I sincerely doubt the numbers will ever even out for me specifically."

Kamer added: "And this happened over a dick joke."