Dolly Parton gave her stamp of approval to a standout group of women who received a Golden Buzzer for their take on her hit song “Jolene” on “America’s Got Talent” this week.

For their audition, the band called Chapel Hart performed an original song: “You Can Have Him, Jolene.” The song is the band’s modern response to “Jolene,” in which Parton begs another woman not to steal her husband, Carl Dean.

“We figured from 1973 to 2022, we could not still be fighting over the same man,” Danica Hart, one of the members of the group, explained. “So, we decided to tell her: You can just have him, Jolene.”

Well, not only did the performance catapult the women straight to the live shows, it also caught the attention of Parton herself.

“What a fun new take on my song, @ChapelHartBand!” the country singer tweeted, before cheekily adding: “Carl’s birthday is today so I think I’ll hang on to him, and I’m not notifying Jolene that today is his birthday.”

All of the judges had already given out their Golden Buzzers, but they were so impressed with Chapel Hart’s performance that they decided collectively that the group deserved one anyway. The judges gave them a collective Golden Buzzer and a ton of praise.

“We’ve been trying to break into Nashville for the last couple years, but it’s been kind of hard, when, I think, country music doesn’t always look like us,” Danica said. 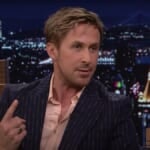 Also Read:
Ryan Gosling Rages Over Under-Appreciation of Ken Dolls: ‘He’s an Accessory, and Not Even One of the Cool Ones’ (Video)