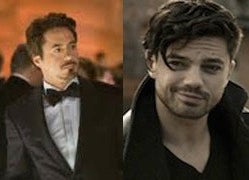 So now we know how Tony Stark wound up with Captain America’s shield in "Iron Man 2."
More on that in a bit … first, the news:
Up-and-coming British actor Dominic Cooper ("The Duchess," "An Education") will play American industrialist Howard Stark, the father of Tony Stark (ahem, Iron Man) in the 2011 film "Captain America: The First Avenger," which is apparently set in the 1940s.
Cooper will actually be the third Howard Stark in the Marvel movie universe.
The elder Stark makes a brief appearance in "Iron Man" (in still shots, portrayed by Gerard Sanders) and returns in archival film footage for "Iron Man 2" (John Slattery).
In the sequel, he posthumously bequeaths a proprietary element to his grown son, Tony, who synthesizes it for the dual purpose of making the reactor that propels the Iron Man suit more powerful — and less toxic to his body.
Cooper revealed to Salon.com in an interview from Cannes that he would be taking the role, which has not been announced by Marvel. "Iron Man" director Jon Favreau did, however, hint that Howard Stark would play a role in "Captain America" in an interview with MTV.
It’s not clear how important Howard Stark will be in the forthcoming film. While the "Iron Man" movie canon depicts Howard Stark as being deeply involved in the Avengers — including as a founding member of the superhero consortium S.H.I.E.L.D. — the comic-book Howard Stark is merely a brilliant inventor and industrialist who is killed in a plane crash, possibly arranged by a rival, when Tony is still fairly young.
But the character’s appearance in "Captain America" would go a long way to explain why, in "Iron Man 2," Tony Stark has what looks like the Cap’s shield just sitting around in his shop — at the time a mysterious Easter egg that got a chuckle out of knowing filmgoers. (Tony uses it as a shim to level out his particle collider, and appears to have no idea that he’s got his hands on an important artifact).
Follow Josh Dickey on Twitter: @JoshDickey