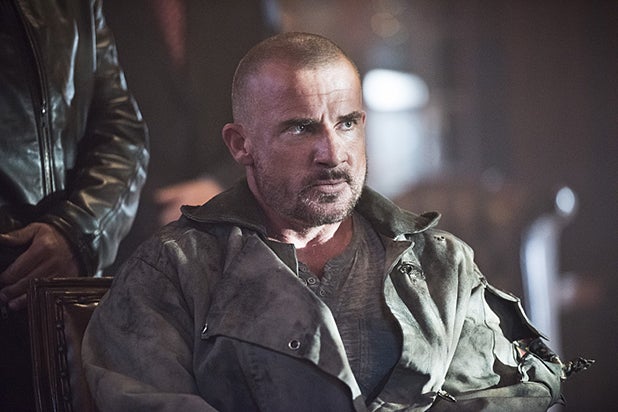 The potential spinoff series featuring characters from The CW’s “Arrow” and “The Flash” has added another familiar face.

Dominic Purcell, who has appeared on “The Flash” as villain Mick Rory, a.k.a. Heat Wave, has been added to the project. He joins the previously-cast Wentworth Miller (Captain Cold), Brandon Routh (Atom), Victor Garber (Firestorm) and Caity Lotz (Canary).

The in-development project, still untitled, is described as a team-up-style show featuring recurring fan-favorite characters from “Arrow” and “The Flash.”

“Arrow” creators Greg Berlanti, Andrew Kreisberg and Marc Guggenheim are working with Warner Bros. TV and Berlanti Productions to develop the spinoff, which will not be part of the current pilot cycle.

The spinoff would also include three DC Comics characters who have not yet made their debuts on “The Flash” or “Arrow.”

Berlanti, Kreisberg and Guggenheim and Sarah Schechter, the team also behind CBS’s upcoming “Supergirl” drama, would executive produce the spinoff.

Purcell will next appear on “The Flash” in the Mar. 24 episode titled “Rogue Time.”

He is best known for starring opposite Miller on “Prison Break,” and is represented by UTA and Linsten Morris Management.