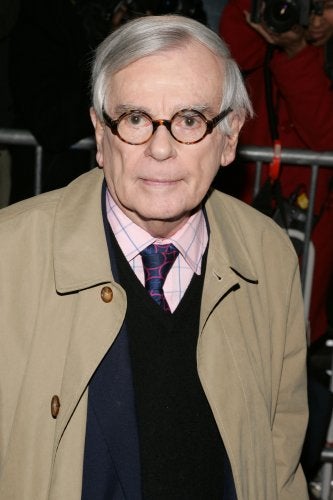 Last night about 50 friends of Dominick Dunne gathered in the Chateau Marmont’s sixth-floor penthouse to honor the writer whose serrated prose and shrewd insights elevated celebrity trial reporting to an A-list activity.

Dunne, who would have turned 84 yesterday, passed away in August of cancer, having lived to see justice finally catch up to O.J. Simpson in a Nevada courtroom far from Los Angeles.

Thursday night’s toast to Dunne was attended by a mix of the people he knew from Hollywood and the courts, and also by the street reporters he met and befriended during the first Phil Spector trial – Ciaran McEvoy, Peter Hong, Harriet Ryan and the court blogger Betsy Ross, aka “Sprocket.”

Dunne’s actor son, Griffin, recalling that as a child his parents would visit friends in this very same suite, related how Dominick gave his kids firecrackers to toss at the police down on Sunset Boulevard during the curfew riots of 1966.

Organized by Bonnie Russell, who befriended Dunne late in his life and set up the Website Dominick’s Diary, the evening was a relaxed and intimate affair. There was no posturing and, like Dunne’s personality, it was marked by quiet wonder and low-key elegance – and without the interruptions of  cell phones.

One speaker summarized Dunne’s place in journalism by reminding the gathered that Dunne was not a gossip columnist, as was thought by some. Although he could regularly be found lunching at his wall table at Michael’s on West 55th Street in Manhattan, Dunne was no Walter Winchell spitefully trading in scandal and semi-truths at the Stork Club. Instead, he would take in the room as a naturalist would a meadow, perhaps noting the arrival of Barbara Walters at one table, or a birthday party for financier Felix Rohatyn at another.

It was as a synthesizer of information, brought to him from linen-draped tables or from the street, that Dunne excelled — as a social observer rather than a mere gosssipeur.

And while his private milieu remained firmly Eastern, in recent years he seemed, in both his Vanity Fair columns and in conversation, to have softened his disdain for Los Angeles. He genuinely loved the Chateau Marmont, which became his unofficial West Coast residence, and in the end he seemed reconciled to the Hollywood that had been the source of so much personal and professional pain.

Last night Dominick Dunne had come home to an appreciative town that was more than just another trial venue.