Don Lemon doesn’t have a lot of patience for Republicans complaining about the way President Joe Biden has been talking about them. And on Wednesday’s episode of his CNN show, he laid into conservative pundit Scott Jennings, mocking him other Republicans who “got the vapors” by accurately noting that Donald Trump “every day, talked s— about everybody.”

The remarks came ahead of Biden’s Thursday-night speech about the threat to American democracy posts by the extremists allied with Donald Trump. If you didn’t watch the speech, Biden, speaking in Philadelphia, made a very good case that Donald Trump and is political allies and supporters are “a threat to this country.” You can read more about it here.

But that speech was a follow-up to remarks Biden last week, when he described Trump’s supporters and allies, which he called “MAGA Republicans,” as semi-fascist,” a term scholars of fascism say is appropriate. Republicans have of course objected strongly to that characterization, including Jennings, who on Lemon’s show Wednesday acted as if Biden had somehow called him a fascist. 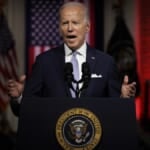 In the clip below, Jennings can be heard saying that his conservative viewpoint “doesn’t make me a fascist, and it doesn’t want me to [hurt] our democracy.”

“I gotta be honest with you, he did not call all Republicans fascists, he said MAGA Republicans, and he made it a distinction, and also pointed out Republicans who were not part of what you’re saying,” Lemon said. “Look, I know it’s a good campaign.”

After stuttering for a few seconds, Jennings said, “Listen, why is it up to Joe Biden to divide up the Republicans? When Republicans go to the voting booth…”

“He’s running,” Lemon interrupted. “OK, Scott, listen. Listen. The former president, every day, talked s— about everybody, including other presidents, including members of his own party, probably you on CNN, and now everybody all of the sudden they got the vapors about one statement that Joe Biden made in the entire year-and-a-half of his presidency? It’s just — spare me.”