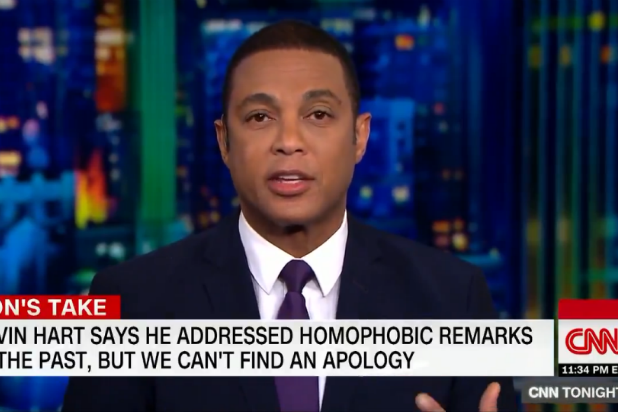 In a frank and emotional statement during his CNN show Friday night, Don Lemon called out Kevin Hart for what Lemon said is a highly inadequate response to the outrage over his homophobic jokes and comments, and called on Hart to do more to “be an ally” to the LGBT community.

Lemon was responding to Hart’s interview with Ellen DeGeneres on her syndicated show Friday. During the interview, DeGeneres said she’d told the Academy she still wants Hart to host the Oscars, and Hart indicated he might be willing to do it.

“For many in the gay community but especially in the black community,” Lemon continued, “the Twitter apologies and explanations on ‘Ellen’ have fallen flat… To many it seems he has somehow turned himself a victim, instead of acknowledging the real victims of violent and sometimes deadly homophobia.”

Lemon then addressed Hart directly: “Kevin, if anything, this is the time to hear other people out. To understand why they might have been offended. Maybe you do it privately, and if you do then I congratulate you. but nothing that you have spoken of. And now, you want the conversation to end.”

“Walking away right now, that is your choice. But many of us really need to keep the conversation going. It’s life or death,” Lemon continued.

Lemon said that Hart, who has “one of the biggest megaphones in the entire world,” could actually be “the ultimate change agent” if he would address the matter directly. “He can help change homophobia in the black community, something Kevin’s old Twitter jokes addressed but in the wrong way,” said Lemon, referencing an old joke in which Hart described how he would punish his son if his son indicated he might be gay.

“Those views of the LGBT people in the black community have consequences,” Lemon said, citing statistics that say 44 percent of homeless gay youth are black, and 62 percent of homeless transgender youth are black. “Those kids were likely kicked out of their homes or had to run away because of who they are and because of how our community treats them. And we have to talk about outreach.”

Lemon also discussed DeGeneres. “Ellen, a trailblazer and respected leader in the LGBT community… she really is, she almost lost her entire career for coming out, for being a trailblazer, for doing it first. She gave Kevin the opportunity to tell his story on her show. That is an olive branch if I’ve ever seen one,” Lemon said.

However, “she says that she forgives Kevin and that he should host the Oscars. But honestly, Ellen doesn’t speak for the whole community.”

Lemon said that he doesn’t understand DeGeneres’ perspective, and if he were called out for not understanding what it’s like to be a white lesbian, he would listen. “So I’m saying, these issues need to be addressed, especially when it comes to gay black youth in our country. Because they need to know that they have value, and it’s OK to be who they are.”

Lemon concluded by once again appealing personally to Hart. “We in the African-American community, we have to stop low key co-signing homophobia. And we won’t tolerate jokes that tell those youth otherwise. We need to talk about how people who may have messed up and become allies as well, because apologizing and moving on does not make the world a better place for people who are gay, or people who are transgender. Being an ally does,” he said.

“So Kevin, no one is against you. No one said that you should be fired or any of that. What they want for you is to bring light to this, to be an ally. So it is your chance to do the right thing, and possibly save lives.”

"Apologizing and moving on does not make the world a better place for people who are gay or people who are transgender, being an ally does," says CNN's @DonLemon, reacting to the Oscars' openness to Kevin Hart's return https://t.co/ITGU3Uj2ez pic.twitter.com/4u48sfBF0U