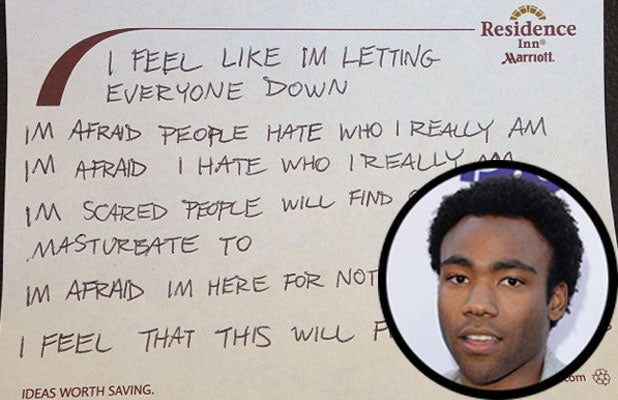 Everybody can relax: Donald Glover is all right. Well, relatively.

“That night, we had a show, and then afterwards, I had this moment of feeling like, ‘What’s the point? Why am I even here?'” Glover told People magazine. “I just wanted to write down my feelings. I definitely was just expressing myself.”

Glover previously expressed concerns of a failed new project, anxiety over a former showrunner’s possible contempt, and even the fear that he’s becoming like a previous semi-popular actor/musician:

The DERRICK Comedy player scrawled, “I’m afraid my show will fail,” referring to “Atlanta,” which he is currently developing for FX and a reason behind his lighter “Community” load.

But don’t worry too much about Glover.

The man known in certain circles as Childish Gambino told People, “If I’m depressed, everybody’s depressed.” Glover continued, “I don’t think those feelings are that different from what everybody’s feeling. Most people just don’t tell everybody.”

“I was just tired of telling people I was tired. It felt like every day someone would ask, ‘What’s wrong. Are you OK?’ ” says Glover. “And I would say, ‘I’m tired, I’m tired.’ I didn’t want to do that anymore.”

“I’m glad people saw it. I feel like I got some stuff out there,” he says. “I got it off my chest. It felt like I had been holding on to something.”