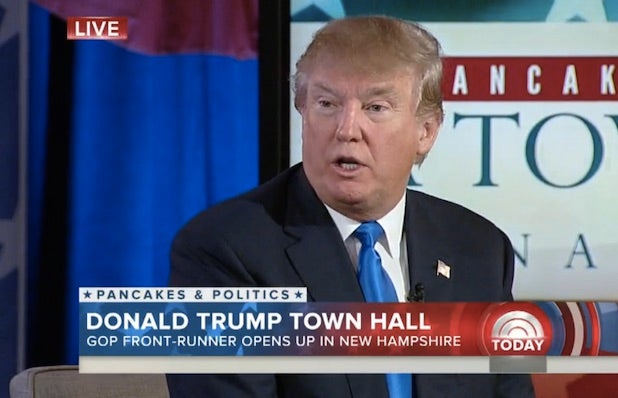 Donald Trump answered questions from over 100 New Hampshire voters on Monday at an NBC “Today” show town hall, and admitted “weaknesses” in the process.

But the GOP frontrunner, who leads in national polls among Republican candidates but recently fell behind Dr. Ben Carson in Iowa, wouldn’t give any details as to what those shortcomings were when responding to a voter.

“I really believe I have weaknesses,” he said, adding he wouldn’t specify because if “you expose them, the enemy knows.” He concluded he doesn’t like talking about weaknesses and he “doesn’t wanna give it up.”

The comment continued Trump’s knack for keeping specifics secret in order to not let foreign enemies like Russian president Vladimir Putin and Syrian president Bashar al-Assad know which areas they can potentially exploit.

The Donald also responded to a mini-controversy swirling around Twitter account after it made a joke about Iowa, the crucial first voting state. “Too much Monsanto in the corn creates issues in the brain,” his account tweeted last week.

Trump explained that although he does “90 percent” of his tweeting, five other staffers tweet for him. One of those staffers thought the Iowa comment was “funny.”

“I didn’t think it was cute so I took it off,” he continued. “These are very smart people… thought it was cute. I probably should have just left it up.”

Also Read: 'The View's' Joy Behar Warms Up to Donald Trump: 'The Guy Is Not as Bad as the Rest of Them' (Video)