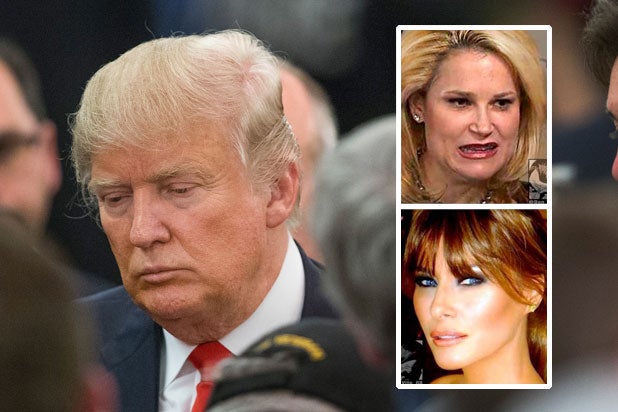 Donald Trump made such a yuge mistake comparing Ted Cruz’s wife to his own that even he regrets it.

In an op-ed on Saturday, New York Times columnist Maureen Dowd recounted a conversation with the GOP frontrunner in which he issued a rare admission of wrongdoing, saying, “Yeah, it was a mistake. If I had to do it again, I wouldn’t have sent it.”

On Mar. 23, the real estate mogul retweeted a post from a follower comparing Heidi Cruz and Melania Trump, based solely on appearance. Dowd shared with Trump that the tweet cost him her sister’s vote.

In trademark Trump fashion, he mitigated the move by asserting, in this election cycle of diminished expectations, “It wasn’t nude!”

It all started the night before the offending retweet, as polls closed during the Western Tuesday primaries. On Twitter, the GOP frontrunner for president wrote, “Lyin’ Ted Cruz just used a picture of Melania from a GQ shoot in his ad. Be careful, Lyin’ Ted, or I will spill the beans on your wife!”

That tweet was a response to a meme posted by the Super PAC Make America Awesome on Facebook, in which Trump’s wife is pictured naked on a fur pelt, accompanied by the words, “Meet Melania Trump, your next first lady. Or you could support Ted Cruz on Tuesday.”

Cruz responded via Twitter moments after Trump’s tweet. “Pic of your wife not from us. Donald, if you try to attack Heidi, you’re more of a coward than I thought. #classless.”

Trump’s juxtaposition of the Texas senator’s wife and his own former model wife followed shortly thereafter.

The Donald has is suffering lately with women voters, a group he wasn’t doing especially well with in the first place.

Also Read: Donald Trump Threatens Ted Cruz's Wife: 'Be Careful or I Will Spill the Beans'

Earlier last month Trump campaign manager Corey Lewandowski was accused by former Breitbart reporter Michelle Fields of nearly yanking her to the ground following a victory press conference to conclude the Florida primary, when he allegedly grabbed her arm forcibly as she tried to approach the candidate.

Despite mounting evidence that some form of altercation took place between the two, Trump earlier this week insisted he doesn’t “discard people,” and would not dismiss Lewandowski from the campaign. Trump previously defended his staffer, suggesting that Fields “made the story up.”

On Wednesday, Trump was forced to walk back comments he made during an interview with MSNBC’s Chris Matthews about abortion, which included saying that there “has to be some form of punishment” for women who undergo the procedure.

“If Congress were to pass legislation making abortion illegal and the federal courts upheld this legislation, or any state were permitted to ban abortion under state and federal law, the doctor or any other person performing this illegal act upon a woman would be held legally responsible, not the woman. The woman is a victim in this case as is the life in her womb. My position has not changed — like Ronald Reagan, I am pro-life with exceptions,” the campaign said in a statement.

The next day on Fox News’ “The O’Reilly Factor,” Trump blamed “convoluted questions” for what he said was a misunderstanding of his position.