Donald Trump is not just the future leader of the free world: He’s also a heck of a pitchman for bottled water.

Just one day after promising to hand over control of his empire to his sons in his latest attempt to address ongoing concerns regarding his many conflicts of interest, Donald Trump invited the world’s biggest tech titans for a pow-wow.

Photographers and camera crews were also there… mostly to take pictures of what the Trump team dramatically dubbed the “Tech Summit.”

Some thought the “most disturbing thing” about the meeting was the fact that his children were there. 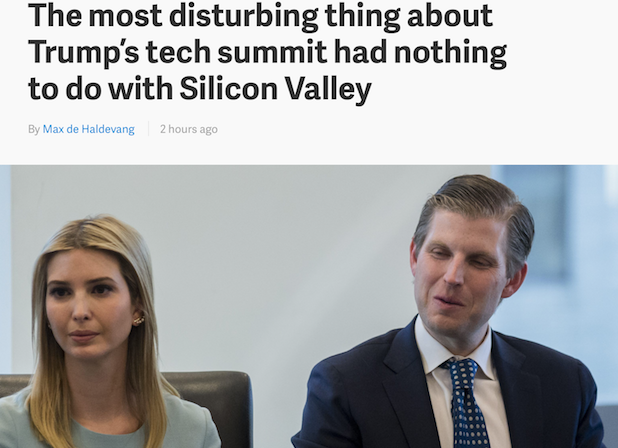 But while everyone was busy talking about who got a seat at the table, few noticed what they were drinking: bottled water, conspicuously placed all over the boardroom table. 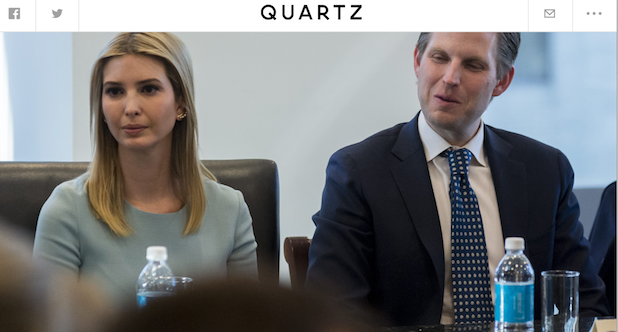 It’s hard to miss, with its distinct Tiffany-colored label. Trump was hawking it all through his campaign… 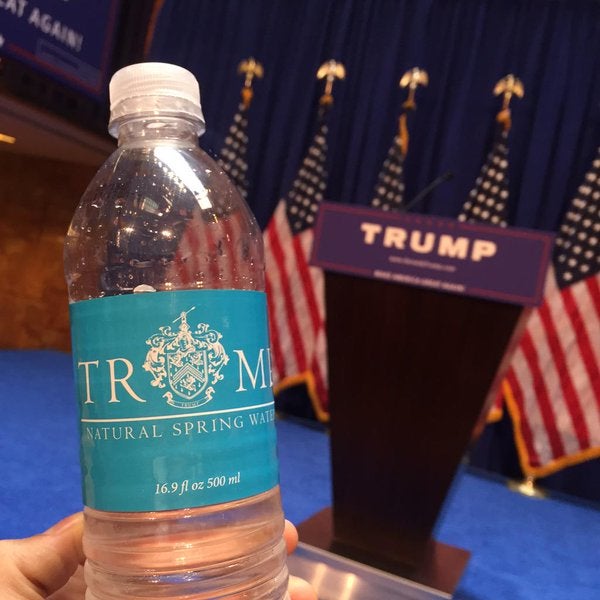 But now he’s using it during official government business.

“He is basically branding his Trump Tower presidential-elect meetings with his own Trump Organization Brand Sponsorship,” marketing expert and founder of the Brand Identity Center Chad Kawalec told TheWrap.  “The value of the exposure — the bottled water appears in nearly every photo and video segment from the conference room – is another incredible marketing freebee the Trump Org enjoys.  I’m sure you could find many bottled water marketers who would love that kind of exposure.”

Also Read: Daily Mail Editor Still Covers Trump Despite Being Considered for Job in His Administration

According to the Trump Organization, the water is served at Trump hotels, restaurants and golf courses worldwide. “The difference is clear,” according to the website. ABC News says he recently reported income of $280,000 from the water sales.

Bottles of Trump water are everywhere. You couldn’t escape them if you tried.

Exhibit A: On Wednesday, Getty Images, a stock photo agencies used by many media outlets including TheWrap, offered its clients two picture of Wednesday’s tech meeting. Here’s the first one: 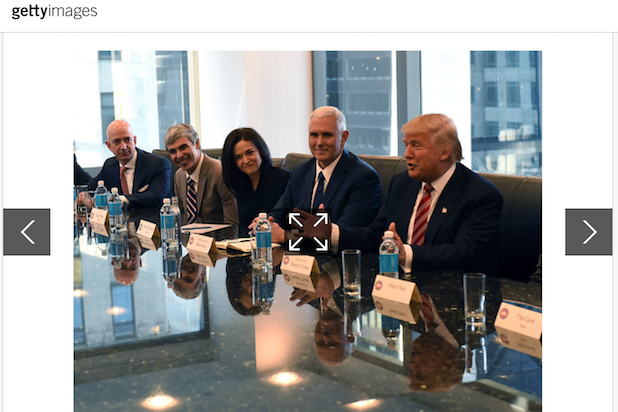 And here’s the second: 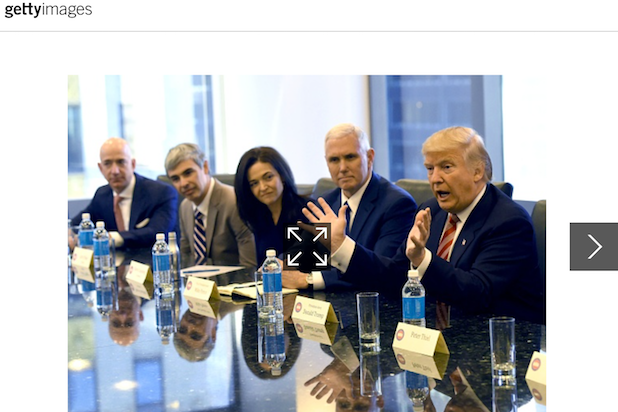 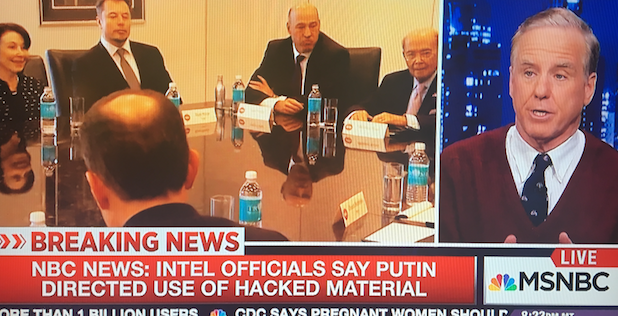 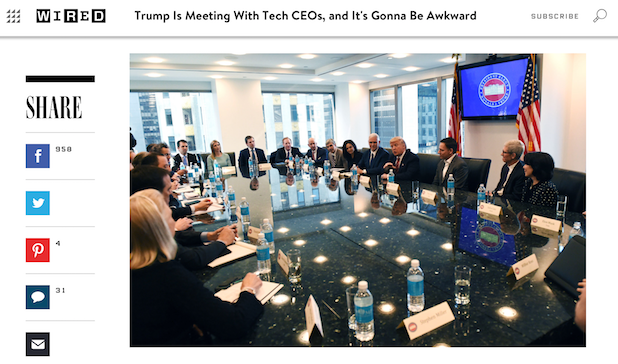 The New York Times had a video… 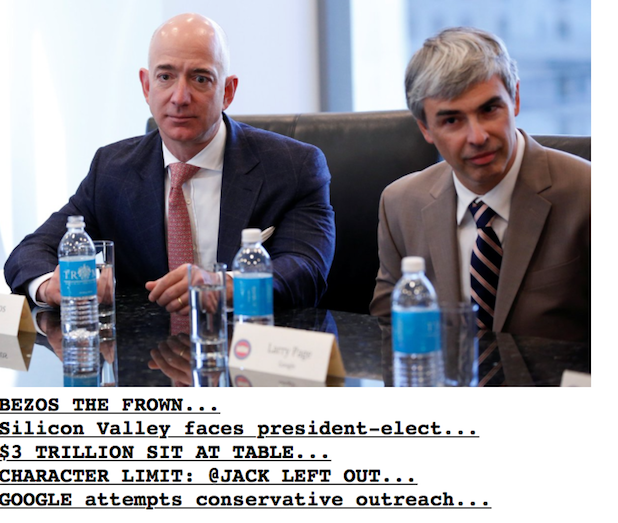 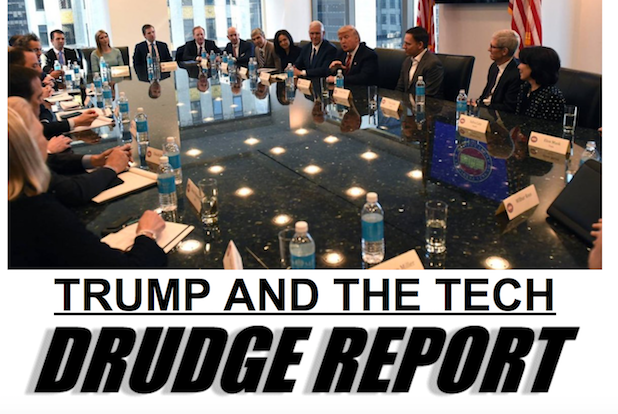 Water-gate is expanding. Trump has been placing his bottles at many Trump Tower meetings.

Here is Republican nominee Trump in August holding a roundtable meeting with the Republican Leadership Initiative. 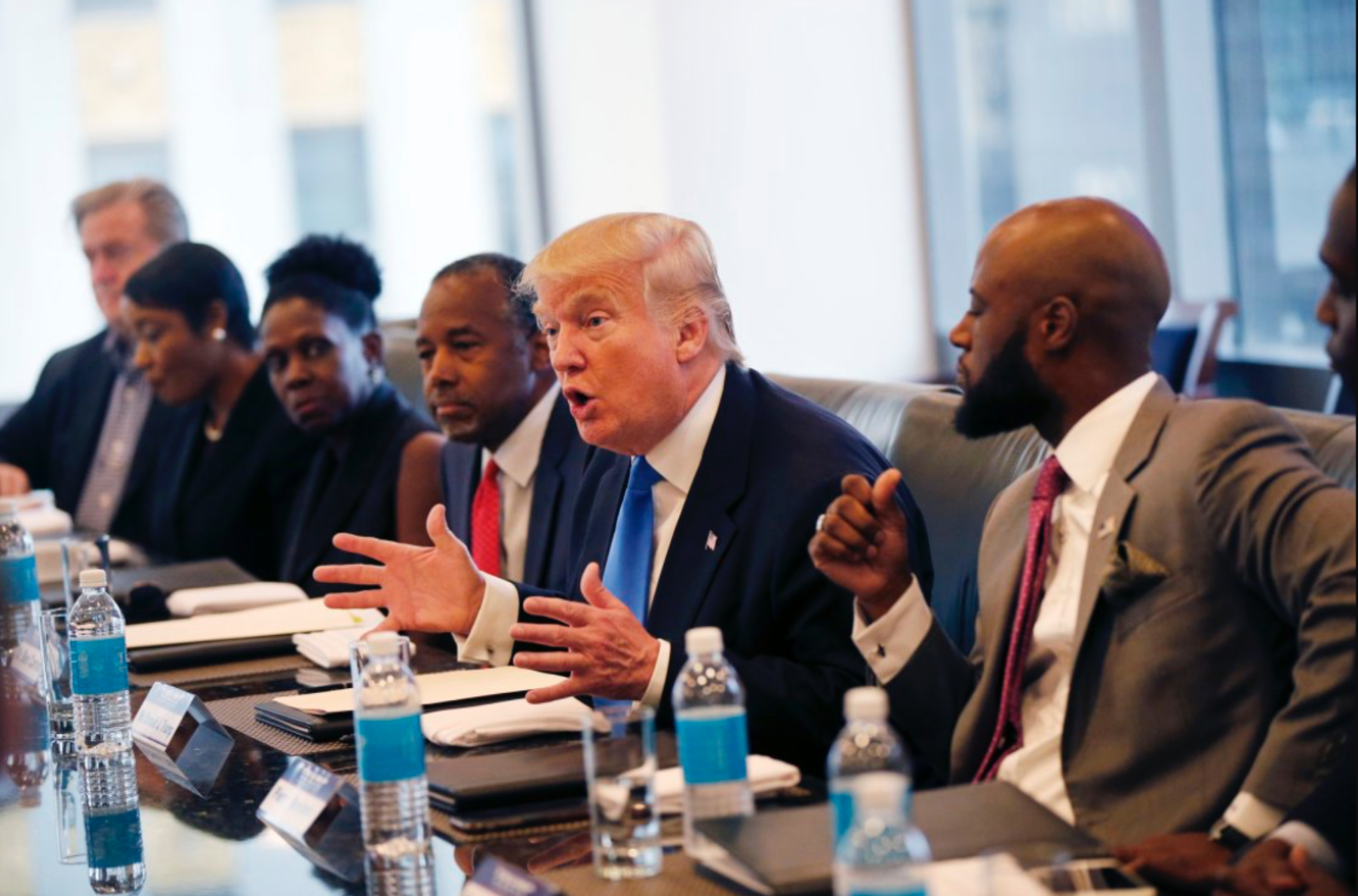 … And in October, for a meeting with leadership members of the National Border Patrol Council… 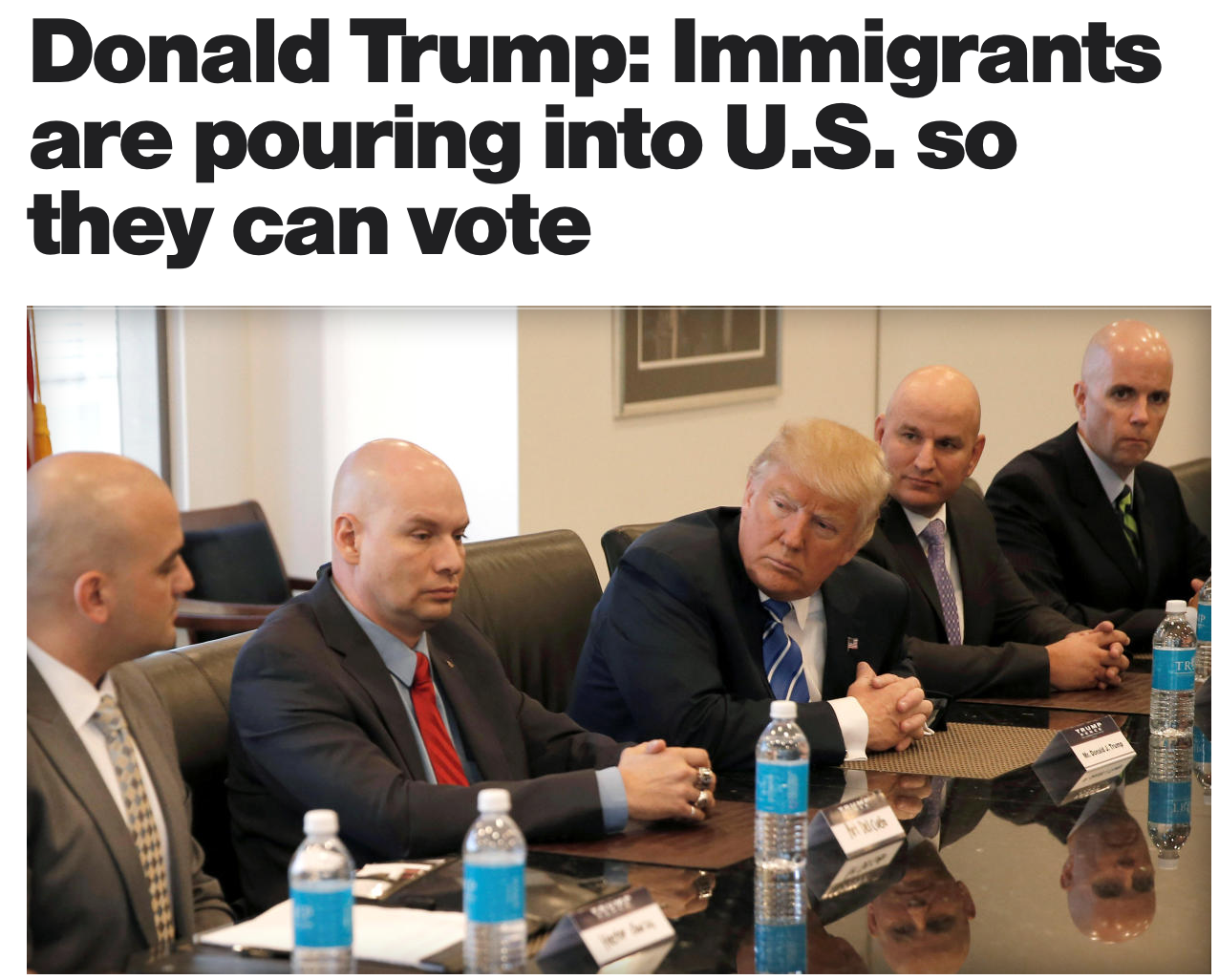 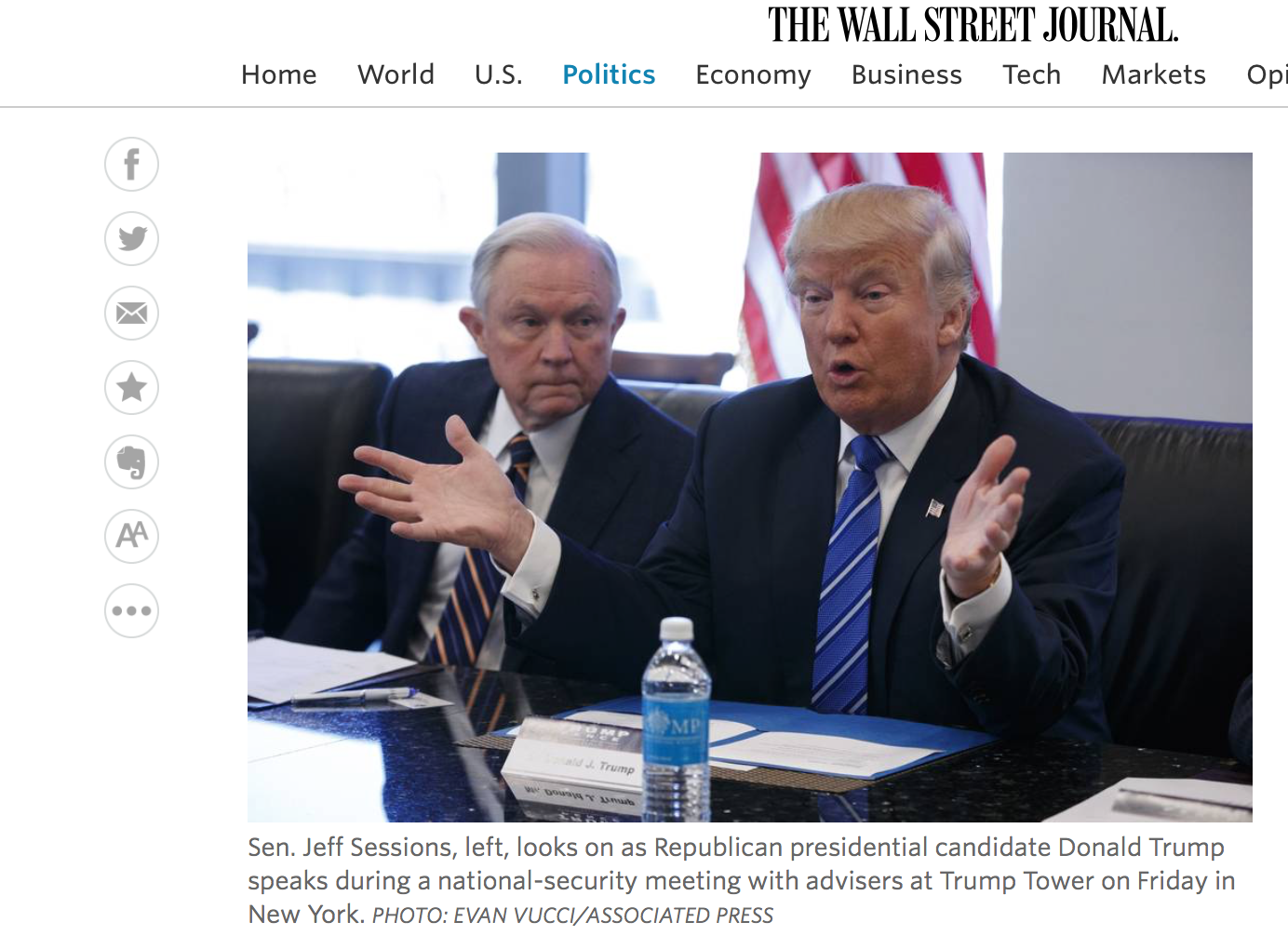 And how could we forget this gem from March? 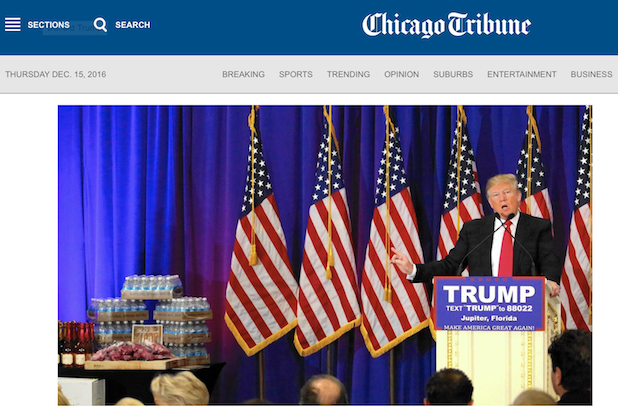 Democrats are already rolling out a new bill to force Trump to divest. Trump has been resistant to the idea… but if he doesn’t do something soon, all these shady promotions could land him in hot water.