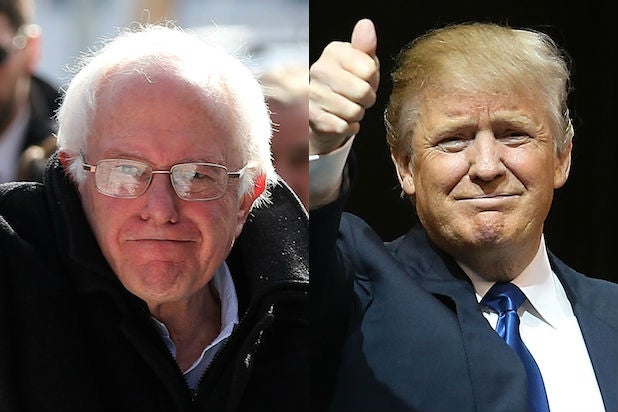 Donald Trump and Bernie Sanders won Tuesday’s New Hampshire primary, claiming their first victories in the 2016 presidential race. John Kasich won the fight for second place on the Republican side.

Trump and Sanders rode an anti-establishment wave that has helped define the 2016 election cycle. Trump warned supporters in his victory speech that Sanders “wants to give away our country, folks.” Sanders said that his win sends a “message that will echo from Wall Street to Washington.”

During her concession speech just minutes earlier, Clinton tried to score points on the economic issues that have helped Sanders surpass early expectations. She told her supporters that Wall Street should never pose a threat to Main Street.

New Hampshire was considered friendly territory for Sanders, who comes from neighboring Vermont, and was largely regarded as a must-win for him in order to stay competitive with Hillary Clinton.

For Trump, it was a moment of vindication following a loss to Texas Sen. Ted Cruz in Iowa last week.

The swift early wins by Sanders and Trump were a departure from the Iowa caucuses, which were so tight on the Democratic side that they weren’t decided until the next morning.

New Hampshire turnout appeared strong, despite harsh winter conditions across much of of the state.

Line up to 2 miles long of people still waiting to vote in Merrimack. #NHPrimary https://t.co/8TbvD5PI7n pic.twitter.com/YBurFHT2jJ

Also Read: Why I Switched My Support From Hillary Clinton to Bernie Sanders (Guest Blog)

Nearly half Republican primary voters made up their mind in the past week, according to early exit polls conducted by Edison Research for the Associated Press and TV networks. About half of GOP voters said they felt “betrayed” by party officials.

Their Democratic counterparts, on the other hand, made their choice earlier, with more than half saying they decided on their candidate more than a week ago.